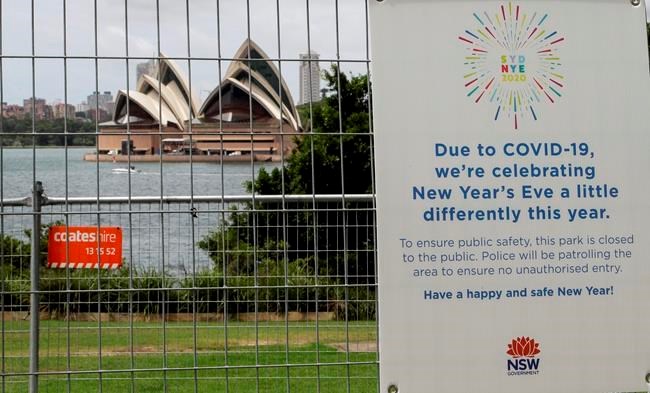 Tokyo is seeing a record surge in coronavirus cases as the governor of the Japanese capital implored people to stay home.

She asked people to skip countdown ceremonies, and expressed concern people were out shopping in crowded stores.

“Please spend a quiet New Year’s with your family and stay home,” she said, switching to English for “stay home.”

She said the latest figures for Tokyo showed 1,300 new infections. The previous biggest daily number of cases for the capital was 949 people reported last Saturday.

A vaccine rollout in Japan is expected months after the U.S. and parts of Europe.

There has been no lockdown in Japan, just requests for social distancing and mask wearing, as the government juggles encouraging business activity with containing health risks.

Japan has had more than 230,000 cases of COVID-19 and more than 3,000 deaths. Sixty-five of the deaths came on Wednesday, the health ministry said Thursday.

Government-backed discounts for travel have been discontinued after infections started climbing.

In other developments around the Asia-Pacific region:

— South Korea has enforced its toughest physical distancing rules at correctional facilities after a cluster of coronavirus infections flared at a Seoul prison. The Justice Ministry says 918 people — 897 inmates and 21 staff — at Seoul’s Dongbu Detention Center have tested positive for the virus since one of the 's officials was found infected on Nov. 27. One of the infected inmates has died. South Korea is struggling to contain a viral resurgence tied to a variety of sources. Earlier Thursday, South Korea reported 967 new virus cases, taking the country’s total to 60,740 with 900 deaths. The new curbs will ban visitors for inmates, while trials and summoning of inmates will be minimized. In-prison educational classes will be halted, planned paroles of some inmates will be implemented early and prison staff are prohibited from engaging in outside activities.

— Thailand will receive the first 2 million doses of a coronavirus vaccine in February, as the country grapples with a surge in cases. Health Minister Anutin Charnvirakul made the announcement Thursday but did not identify the manufacturer. Thailand has signed a deal with Oxford-AstraZeneca to locally produce 180 million-200 million doses for Southeast Asia. Out of that, it has reserved 26 million for its population. Media reports quoted officials as saying the first locally produced shots aren’t expected before May. Anutin said that Prime Minister Prayuth Chan-ocha had assigned him to negotiate with every company that has started selling vaccines. “Today we will continue the negotiation to secure more vaccine and get them as soon as possible for the safety of Thai people, which is the most important mission of the Thai government at the moment,” he told reporters. On Thursday, Thailand reported 194 new cases, including 181 local transmissions. The new outbreak, which began at the country’s largest wholesale seafood market south of Bangkok, has spread to 51 out of the 76 provinces.

— Chinese health regulators have approved a coronavirus vaccine developed by state-owned Sinopharm as the first one for general use in China. The go-ahead comes as the country carries out a campaign to vaccinate 50 million people before celebrating the Lunar New Year in February. The company earlier said preliminary data had shown the vaccine to be 79.3% effective. The approval is conditional for now, meaning research is still ongoing and the regulators may seek more data or restrict the vaccine for certain groups.

— This New Year’s Eve is being celebrated like no other. Pandemic restrictions are limiting crowds in many places as people bid farewell to a year they’d prefer to forget. Australia is among the first nations to ring in the New Year due to its proximity to the International Date Line. One million people would usually crowd the Sydney Harbor to watch the annual fireworks that on the Sydney Harbor Bridge. But this year authorities are advising revelers to watch the fireworks on television. New Zealand, Taiwan and other places with successes against the virus are celebrating like usual.