Jane Seyd
Jul 6, 2021 2:26 PM
Previous Next
1 / 1 Seaspan's Vancouver Drydock is viewed from the Shipyards District on July 5, 2021. The company is seeking an expansion of its water lease to add additional dry docks. Paul McGrath / North Shore News
Expand
Previous Next

This article has been amended since first posting, to clarify that the proposed expansion is to the west of the existing dry dock.

Seaspan Shipyards is seeking permission from the Port of Vancouver to expand its Vancouver Drydock operation by adding two new dry docks and a work pontoon to current operations next to the city’s Shipyards District.

The company has applied to the port to expand its water lot lease and add two smaller dry docks to the west of its existing dry docks – towards Burrard Pier.

To help minimize the impact on the nearby residential area, the proposal involves pushing the existing careen dry dock 40 metres further away from the shore. A new 100-metre dry dock and 55-metre dry dock would then be added, extending about 55 metres west of the current dry dock. Up to four cranes would be installed on the new mid-sized dry dock.

Paul Hebson, vice-president and general manager of Seaspan’s Vancouver Drydock, said the expansion is needed to consolidate all of the company’s ship repair work at the Vancouver Drydock site, while the Seaspan Shipyards site at the foot of Pemberton Avenue becomes fully dedicated to building large ships like the joint support ships for the Canadian Navy and icebreaker for the Coast Guard.

“We’re actually at the point where we're just completing the last repair that we've got physical capacity to do that at the Pemberton site,” he said.

“For the past three to five years we've been operating absolutely at full capacity and we've been fairly regularly turning work away.”

In particular, the new dry docks will add the ability for the company to do repairs on smaller ships, said Hebson.

The expansion project is expected to create about 100 additional jobs in ship repair at the dry dock, according to Seaspan.

In its report to the port, the company acknowledges the biggest impacts of the project are likely to be felt by residents of nearby waterfront highrise towers, including Pinnacle International's Cascade at the Pier and Trophy at the Pier condominium communities.

As part of the public input process, some residents have already voiced concerns about issues including the potential for increased noise, light and impacts to views.

Those concerns are behind the plan to push the existing careen dry dock further away from the shore, said Hebson.

He said according to a noise study done by Seaspan, the extra noise from an expanded operation is expected to be between one and three decibels, “which is something that most folks can’t actually discern.”

The company also proposes to install “dark sky lighting,” he said, involving a combination of shades and directional lighting to minimize impact.

One of the first questions posed by nearby residents has been why the expansion is being proposed to the west of the existing dry dock, instead of east, away from the residential areas.

Hebson said the main problem is that Seaspan is using its “W” building on shore to manufacture components for its shipbuilding operation and needs to have water access via a barge to offload those twice a month.

Other options would mean siting the dry docks closer to the shore, which would have a greater impact on views, he said.

Public input on the proposed expansion is being sought by the company until July 30 as part of its application to the port.

Hebson said the company is optimistic it can develop a plan acceptable to residential neighbours. “We’ve operated a shipyard in this sort of mixed-use environment for 100 years,” he said.

Staff from the City of North Vancouver have discussed preliminary information about the project with Seaspan over the past several months but have only recently received detailed project information and are in the process of reviewing that, according to Robert Skene, director of community and partner engagement for the city.

The city anticipates providing comment to both Seaspan and the port prior to the July 30 deadline.

If the port grants approval, the earliest the new expansion would go into operation is likely 2022, said Hebson, with construction – including pile driving – expected to take about six weeks leading up to that. 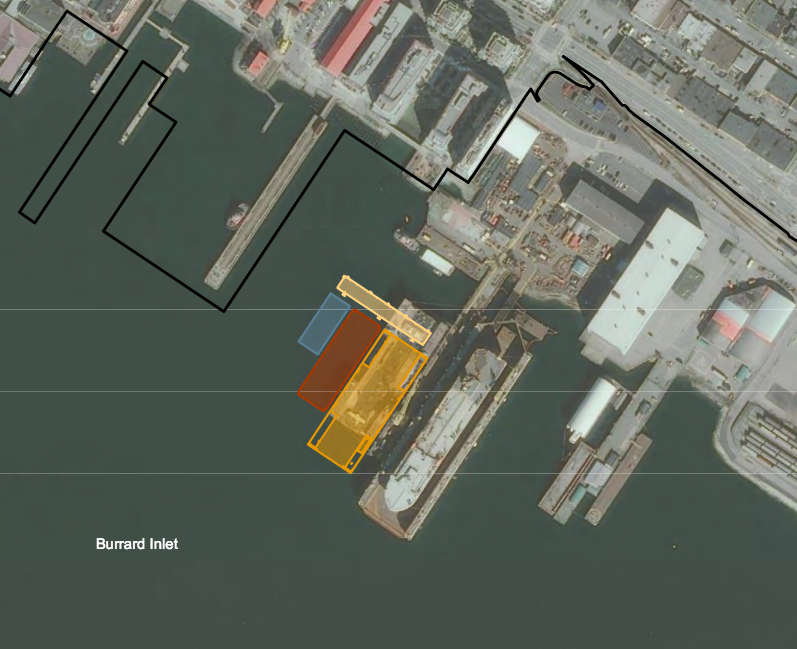