Updated: Dozens of people sleep in their cars as Queen of Capilano sailings cancelled Sunday evening

Bowen Islanders step in to offer accommodation for tourists and rides for islanders forced to cross without cars
May 10, 2021 2:58 PM By: Bronwyn Beairsto 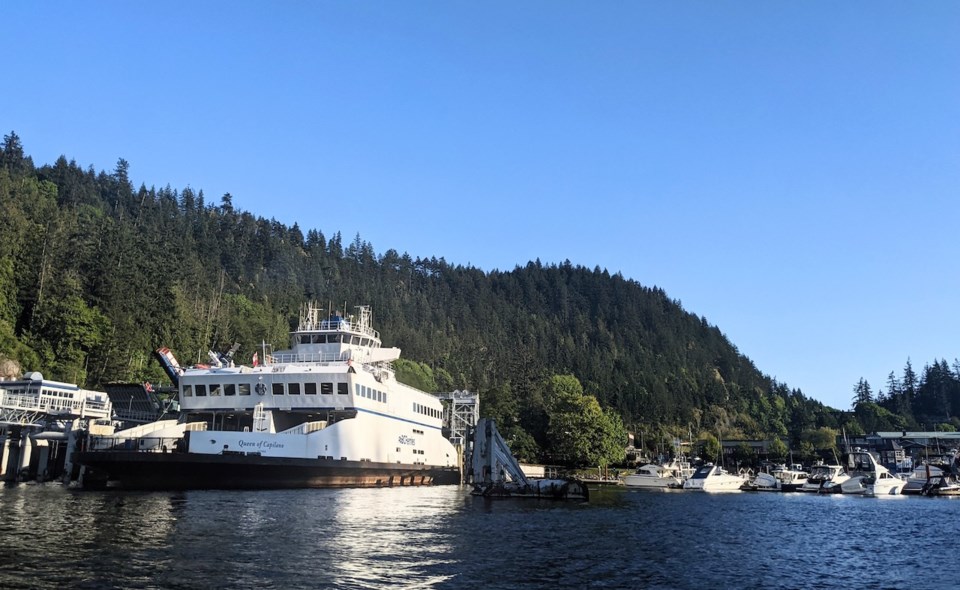 Queen of Capilano holding in dock in Horseshoe Bay May 9, 2021.Bronwyn Beairsto

For some it was the worst ever Mother’s Day present, for others it was a display of Bowen’s community spirit.

When the Queen of Capilano ferry sailings were unexpectedly cancelled from 4:30 p.m. onward on a gorgeous sunny Sunday, dozens of passengers were stuck on either side of the route.

Islanders who’d been on the mainland lined up at the dock in Horseshoe Bay while rumours swirled that the water taxis weren’t running (Sunshine Coast Water Taxi and later Cormorant Marine did step in to transport stranded folks across the sound). Cpl. Adam Koehle of Bowen RCMP estimates that the taxis transported well over 100 people, locals and tourists, across the sound. Some islanders commented on Facebook being in the Horseshoe Bay car lineup for hours with tired children (the worst Mother’s Day present ever, said one commenter) and some sought out mainland hotel rooms.

Through the Bowen Island Everything Else Facebook group and Bowen Ferry Realtime Updates Facebook group, islanders coordinated rides for those crossing to Bowen without their cars and arriving after the bus had stopped running.

An impromptu taxi service of sorts popped up. “Folks were driving down there pretty steadily and picking people up,” said municipal councillor, Maureen Nicholson, who arrived in the Cove at about 8:30 p.m. “There were others who just came down and parked at the ferry and offered rides home.”

“When we were walking the [ferry] line, there were numerous times when the cars coming down stopped and asked us if we needed a ride,” laughed Nicholson. Local pastor Phil Adkins walked the lineup with Nicholson, checking on car occupants.

At one point, three youth who had come to the island to buy a used car showed up. This was their first trip to Bowen, said Nicholson. “They were just pretty amazed by what was going on.”

Bowen Islanders also stepped up to offer rooms, suites, even kitty litter boxes, for tourists stuck on the island side.

A point of frustration for Nicholson was that the big glowing BC Ferries sign in the Cove didn’t change to reflect the cancellation, instead it read “next sailing, 9:30 p.m.” said Nicholson.

The ferry’s problem was “with the electronic and software management system of the emergency generator,” said BC Ferries’ manager of community relations strategy and community engagement Darin Guenette in an email. “After thorough troubleshooting, our technicians solved this problem, replacing parts and updating software as required.” The ferry service isn’t planning follow-up maintenance, said Guenette.

While the first Monday morning ferry was cancelled as it awaited Transport Canada approval, the second one did run but the traffic backlog took until noon to clear up on the Bowen side, said Koehle.

While the municipal response consisted of the mayor making a call to Koehle about the Cove situation, Nicholson says there’s a gap that needs filling.

“One of the upshots of all of this was that there probably should be an official municipal response to these circumstances because BC Ferries doesn’t respond to them,” said Nicholson.

May 9 was the second day in a row the ferry saw cancellations. The Queen of Cap ended its runs early Saturday to have planned repairs done overnight. While a similar evening of planned cancellations caused a ruckus a few weeks ago, Koehle said BC Ferries communicated the schedule change much better and he only had to turn away two vehicles of people waiting for the ferry after the 6 p.m. cut-off. Both vehicles of people had places to stay, said Koehle.