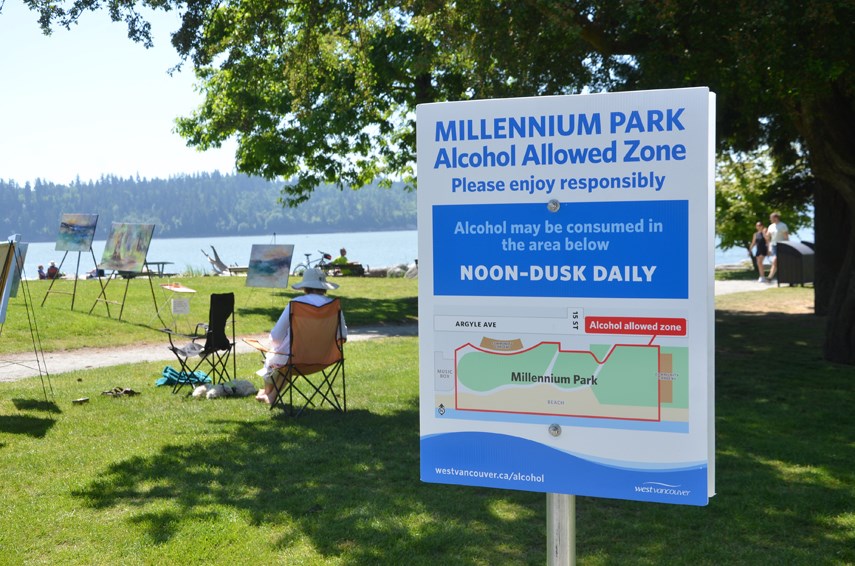 As of June 1, 2021, signs have been posted in West Vancouver's Millennium Park allowing the consumption of booze in public. Council will review the pilot project after it expires in October.Brent Richter, North Shore News

Pop the corks, West Van (but only if you’re in Millennium Park).

Responsible consumption of alcohol is now permitted in the green space at the foot of 15th Street in Ambleside.

Council voted last month to initiate a five-month pilot project, but before the new rules could be implemented, one final vote was required by council. That vote passed unanimously without any discussion Monday night, and signs are now posted in the park.

Under the pilot project, booze is permitted in the park from noon until dusk, seven days per week until Oct. 31.

“There has been increased interest in open outdoor spaces for the community to safely connect with their personal bubbles during the pandemic. Patrons can bring takeout, including alcoholic beverages, to the park to enjoy,” a message now posted to the district’s website states. “This supports local restaurants, cafés, and other food service providers that have closed indoor dining due to public health orders and have limited outdoor seating capacity to abide by physical distancing requirements.”

Council is expected to review the pilot project in November.

The district chose Millennium Park for the experiment in liberalized drinking because it is the location of the Harmony Arts Festival where alcohol has been served in the past.

West Vancouver police and bylaw officers will have the power to hand out $500 fines to anyone who overindulges or wanders outside the designated park boundaries with their IPA or chardonnay.

In 2020, City of North Vancouver council opted to permanently legalize alcohol within seven of its parks. The District of North Vancouver was scheduled to vote on a similar change Monday night, but council ran out of time and the agenda item was punted to June 21.

Vancouver park board will allow drinking in parks as soon as province allows it
Jun 1, 2021 4:21 PM