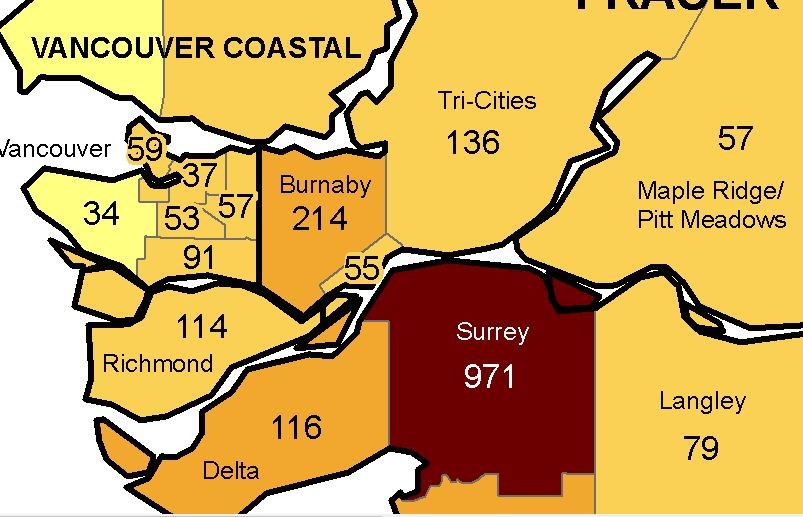 The latest Burnaby and New West COVID-19 numbers, as well as other Metro Vancouver cities.BCCDC

New COVID-19 cases in Burnaby continue to drop, but I’m not so sure the latest decline is reflective of the situation.

From Nov. 29-Dec. 5, Burnaby had 238 cases, which is the exact same number Burnaby had for the entire month of September, according to the BCCDC.

What has me skeptical about the steep drop is that health officials have said that the number of tests dropped the week of Christmas.

Dr. Bonnie Henry noted that it is crucial for people to remain vigilant in following health orders, since part of the reason for the drop in numbers has been a similar decline in people seeking COVID tests prior to the holidays - perhaps in an attempt to avoid having to change plans around the Christmas season.

Let that last sentence marinate for a few minutes to imagine people avoiding getting tested because they don’t want it to disrupt Christmas.

So we shall see in coming days if Burnaby’s decline in cases continues to drop at a rapid rate or if they will start climbing again after the holidays are over.

I hope I’m wrong about all of this. I’m hoping people are just following the tougher rules and that is why Burnaby cases are falling. I hope they will continue to drop.

Henry said the ban would apply to all alcohol sales from liquor stores and retailers to bars and restaurants, regardless of whether the liquor would be used for on-site or off-site consumption.

“What we’ve seen is people following the rules early in the night, but as they consume more, you see more table-hopping and risky behaviour,” Henry said at a news conference Wednesday called only about 90 minutes ahead of time. “You see more people bending the rules. So for this one night, knowing the temptations facing people, we’ve moved up last call.”

Henry and B.C. Health Minister Adrian Dix maintained that this ban is a one-time occurrence, although Henry admitted that officials are talking about the COVID transmission risks being posed by holidays like St. Patrick’s Day.

New cases of COVID-19 skyrocketed in Burnaby in November with 1,081.

That’s a huge jump from the 287 cases Burnaby had in all of October and 238 cases in September.

When the December numbers come out, the NOW will cover that.

Hubby tests positive for COVID-19 after wife discharged from Burnaby Hospital
Dec 27, 2020 8:20 AM