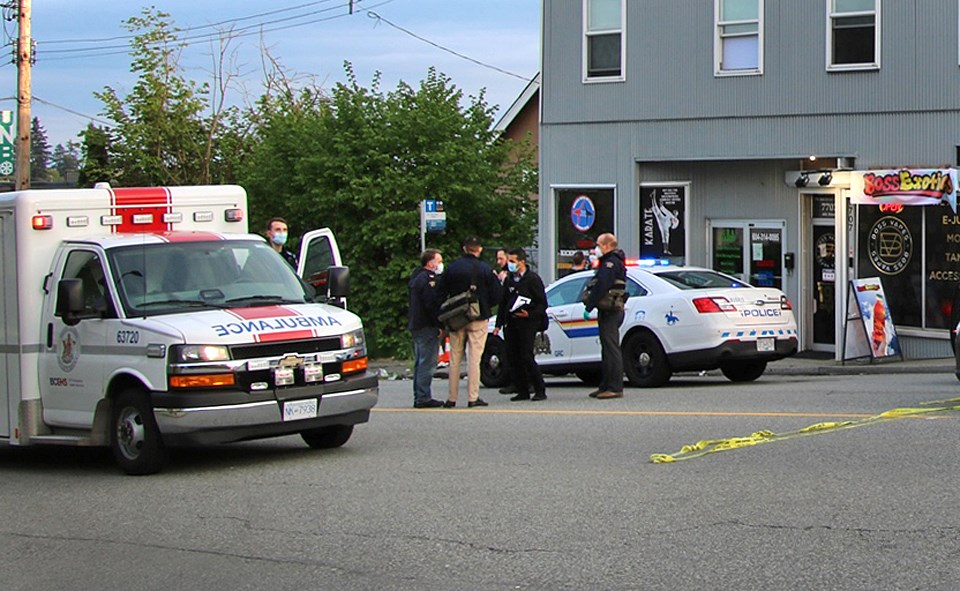 Emergency crews respond to a fatal gangland shooting that killed one man and injured another in Burnaby on May 8. Ryan Stelting

The 20-year-old charged in a fatal gangland shooting outside a Burnaby vape store earlier this month might have gotten away if it hadn’t been for some alert neighbours who called police.

“They called the RCMP and started providing information, saying ‘Hey, we have someone who doesn’t belong in the neighbourhood,” said Burnaby RCMP Staff Sgt. Maj. David Douangchanh. “They recognized that fact, and with their assistance in combination with police resources that we had in the area, we were able to quickly determine the location of the suspect and effect the arrest.”

The information about the neighbours’ involvement came out during a pair of public online information sessions put on by local police to discuss community concerns after the brazen daylight shooting on May 8.

Blerton (Toni) Dalipi was shot to death outside of the Boss Vapes store on Sixth Street near 13th Avenue at about 7 p.m. that night.

The shooter was captured on security video. It shows him firing several shots with a handgun, turning, stumbling to the ground and then taking off.

Hosting information sessions for neighbours after murders in their area is still new for the Burnaby RCMP, but it’s something the detachment intends to continue moving forward, according to Insp. Kathy Hartwig, the officer in charge of community programs.

Burnaby RCMP’s first such event was in March after police discovered the burning body of Ma Cecilia Loreto in Greentree Village Park off Garden Grove Drive.

In response to a second deadly gang shooting outside of the Cactus Club on Byrne Road on May 13, they are planning another session for businesses in the Market Crossing area next week.

At this week’s sessions, Hartwig said residents wanted to know why the murder had happened in their neighbourhood.

They asked whether the victim and suspect were from the area and whether the vape store was a known gang hangout, according to Hartwig.

The answer to both those questions was no, she said.

The victim and suspect were both from Burnaby but not from that neighbourhood, according to police.

Neighbours also wanted to know why the suspect had tried to hide at a certain address in the neighbourhood and whether he was associated with that address in any way, but police said he was not.

When area residents asked what they can do to help, crime prevention unit coordinator Dawn Dickinson urged them to call police if they see something suspicious – just as they did on May 8.

Burnaby RCMP had passed out flyers in the area inviting neighbours to the online sessions, which the detachment has dubbed Burnaby Neighbourhood Incident Response Program (BNIRP) meetings

Only about 14 people participated on Monday, so they opened it up to the broader public on Tuesday, sending out a link on the Burnaby RCMP Twitter page.

We are here to listen and help.

About 64 people participated in the second session.

Hartwig told the NOW the detachment is taking a “global approach” to combating gangs, an effort currently being spearheaded by the province’s anti-gang agency, the Combine Forces Special Enforcement Unit.

“We’re not lone-wolfing it,” she said.

Burnaby and other Lower Mainland police agencies recently gave input into CFSEU’s top-11 list of alleged gangsters believed to be linked to recent gang violence in the region, according to Hartwig.

She said some of the men on the list have links to Burnaby but wouldn't say which ones.

Douangchanh noted 64% of Burnaby’s gang files involve people who live outside of the community, so a regional strategy is needed.