In year of pandemic, Home Depot became supplier to millions

The housing market was among the very few bright spots for the U.S. economy in the year of the lockdown and Home Depot became its supplier, racking up an unprecedented $132 billion in sales for 2020.
Feb 23, 2021 8:52 AM By: The Canadian Press 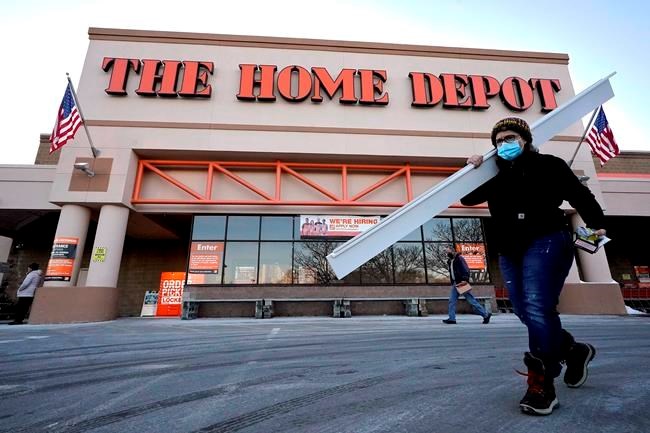 The housing market was among the very few bright spots for the U.S. economy in the year of the lockdown and Home Depot became its supplier, racking up an unprecedented $132 billion in sales for 2020.

Sales grew even stronger in the final quarter of the year, surging 25% to $32.26 billion. That is up from $25.78 billion in the same period last year and exceeded even the lofty projections for $30.66 billion on Wall Street, according to a survey of analysts by Zacks Investment Research.

Home improvement stores became a beehive during the pandemic with millions working from home and attending school remotely. Many families concluded that bigger homes, or at least different homes, were the answer in 2020, driving prices sky high.

On Tuesday, the S&P CoreLogic Case-Shiller 20-city home price index recorded a 10.1% spike in December, compared with the same month last year. That topped the 9.2% jump the previous month, and all other months going back almost seven years.

While Home Depot was not alone in meeting the demand for hammers, paint or appliances that go along with a housing boom, the sheer volume of goods it sold this year were staggering.

Attempting to put that volume into context, Neil Saunders, the managing director of GlobalData, calculated that in 2020 the equivalent of every person in the United States spent $402 at Home Depot.

“It is easy to look at Home Depot’s numbers and chalk up its success to the pandemic,” Saunders said Tuesday. “However, sustaining three quarters of growth above 20% is extremely difficult in terms of the pressure it puts on the whole operation from supply chains to stores.”

Global sales at stores open at least a year, a key indicator of a retailer's health, climbed 24.5%, and by 25% if only U.S. stores are counted.

Earnings, adjusted for costs related to mergers and acquisitions, were $2.74 per share. That handily beat the $2.63 per share Wall Street was calling for.

The Atlanta company on Tuesday said that it was not providing annual guidance for the year, citing the uncertainty of the pandemic. Given the huge numbers Home Depot put up in 2020, that dispirited investors, and shares fell more than 3% at the opening bell.

However, in a show of confidence, the nation’s biggest home improvement chain boosted its quarterly dividend 10%, to $1.65 per share.