Terry Fox secondary music teacher Steve Sainas gets help from MP Ron McKinnon with his federal government petition to call for a living wage for professional musicians.
Jan 27, 2021 10:36 AM By: Janis Cleugh 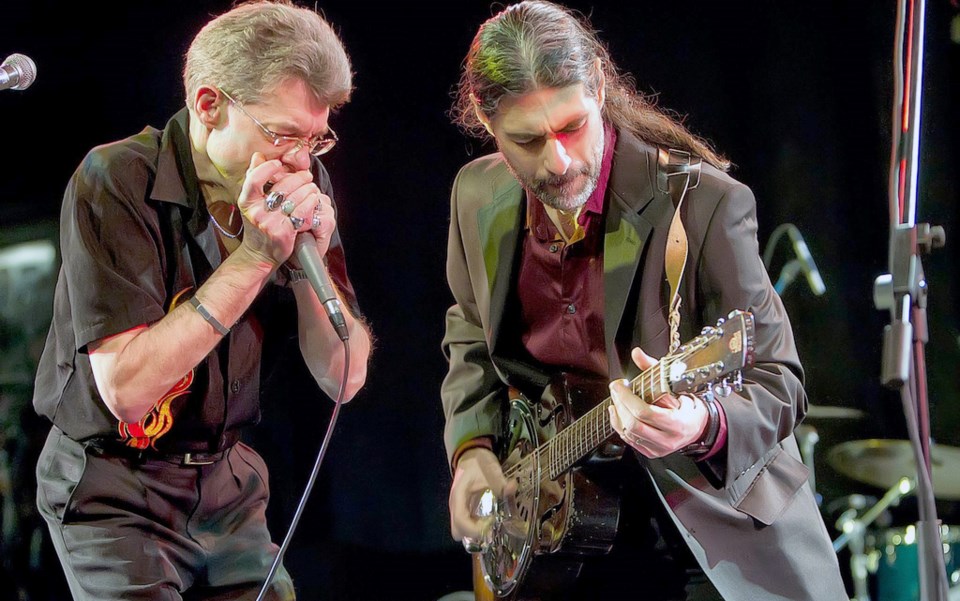 Steve Sainas (right) with his Mud Dog partner Christopher Allen, performing at the New Daisy Theater on Beale Street in Memphis while representing B.C. at the 2011 International Blues Challenge.ARNIE GOODMAN

A Terry Fox secondary teacher who won a Juno award for his music education is now drumming up support to help professional musicians in Canada earn a living wage.

And Steve Sainas has the backing of Coquitlam-Port Coquitlam MP Ron McKinnon, who is scheduled to table Sainas’ petition in the House of Commons on Feb. 23.

E-Petition 2995 now has 1,200 signatures calling on the federal government to create a Canadian Musicians’ Support Fund to top up professional musicians’ income — the amount of which would be determined while the government amends the Broadcasting Act.

The petition also calls for financial help for operators of live music venues, and for more grants for songwriters and for public schools to teach music to students.

“We’re looking for ways to improve the stability and viability for musicians,” McKinnon told the Tri-City News from Ottawa. “Music is so important for Canadians.”

McKinnon, who helped Sainas craft the petition language, acknowledged the push only tackles the music industry and not other artistic or performing arts fields; however, he said, “it’s important to focus and to get a start somewhere. I expect as we make progress, we would take this as best practice and take care of other areas that might need similar treatment.”

Sainas said professional musicians were struggling to make a living even before the global pandemic hit, and without financial relief, the talent pool will dry up.

He’s telling his Rock School students at Fox to set their sights on music teaching or producing “because it’s not sustainable to be a professional musician.”

Ideally, he’d like to see music classified as an essential service in Canada as streaming doesn’t offer fair compensation. Professional musicians, he said, are being exploited.

Sainas already has some big names on his petition, many of whom are also working on his Canadian Musicians’ Coalition team. Among them are folk singer Valdy; Cherelle Jardine (past president of the Pacific Songwriters’ Association); Marc Gladstone (keyboardist with Prism, and Doug and the Slugs); and Juno award nominee and BC Music Hall of Famer Doug Cox.

“We believe this is a reasonable and appropriate proposal to help rebuild our music economy,” Sainas said. “We’re asking for fair reform that allows musicians to earn a sustainable living at a reasonable rate. Right now, the creativity is booming and people are needing more content than ever but yet music is devalued to its lowest point and that’s just not fair.”