Vaccinating B.C.'s essential workers sooner could save over 600 lives: study

Bumping essential workers up the vaccine queue could prevent over 200,000 infections and save over 600 lives across British Columbia, according to a new study from a Simon Fraser University researcher
Feb 24, 2021 2:17 PM By: Stefan Labbé 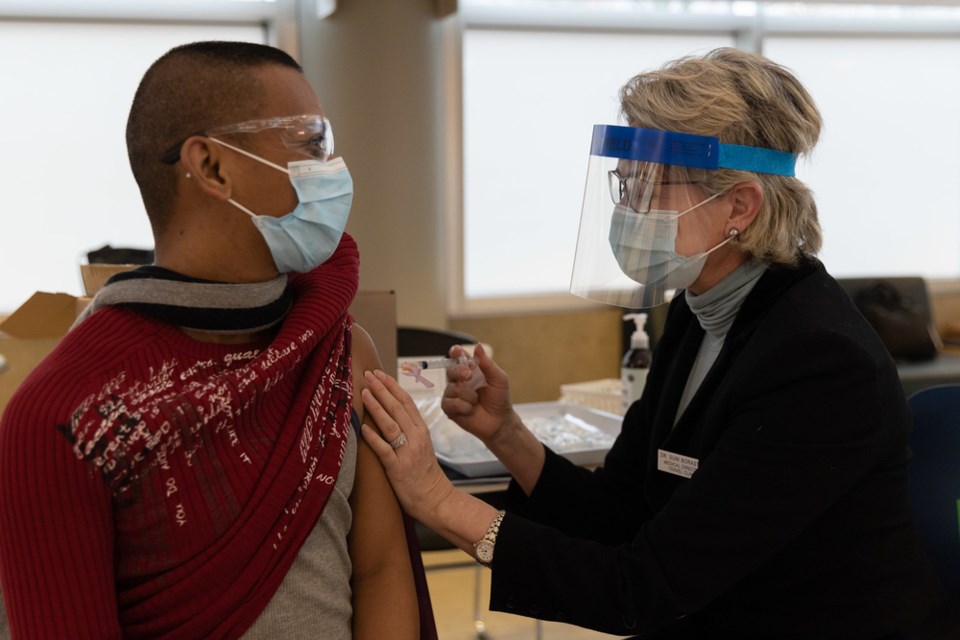 A doctor inoculates a B.C. health care worker with the COVID-19 vaccine from Pfizer-BioNTech.Province of British Columbia/Flickr

A new study modelling the effects of the COVID-19 pandemic in British Columbia has found bumping essential workers up the vaccine queue could prevent over 200,000 infections and save over 600 lives.

The pre-print study, released Feb. 13 and not yet peer-reviewed, modelled how the virus would spread if different vaccination campaign strategies were rolled out, using British Columbia as a model. By targeting essential workers in a vaccination campaign, older individuals were consistently found to receive significant indirect protection from the virus, according to the group’s modelling.

“Our simulations strongly suggest that it is better for everyone if we vaccinate essential workers once those who are 80 and older are vaccinated,” wrote the researchers in a Simon Fraser University blog summarizing their work.

That’s because of increasing evidence that currently approved vaccines are having a positive effect in stemming transmission of the coronavirus. Vaccinate the essential workers — among the population most likely to spread the disease — and reduce the number of elderly people ever exposed to the virus, note the researchers.

Beyond saving hundreds of lives, the study found vaccinating essential workers sooner would lead to a “profound reduction” in the number of so-called “long-haulers” — those who suffer long-term effects from the virus — and produce a net monetary benefit of over $500 million for the province.

SFU infectious disease modeller Caroline Colijn, who conducted the study with colleagues from Alberta and the United Kingdom, said targeting essential workers means vaccinating “anyone who has high contacts at work,” pointing to everyone from teachers, taxi drivers and first responders to those in agricultural work and food production, the retail industry and social work.

At a time when cases of ‘variants of concern’ are growing in B.C., Colijn said stemming the transmission of the virus in the community should be a priority.

But when asked whether she would reconsider moving essential workers up the vaccine queue, Henry said, “The short answer is ‘no.’”

“We are absolutely confident in the marrying of the vaccine we have now with the risk that we have — which is age-based,” she said.