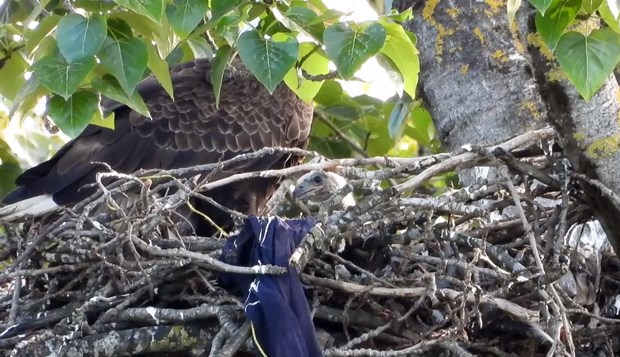 One baby eaglet can be seen poking its head up from an artificial nest near the North Vancouver waterfront, May 13, 2021.North Shore Eagle Network

The eagles have landed. Not only that, they’ve set up a home and have started a young family.

Volunteers from the North Shore Eagle Network say the two eagles successfully relocated to an artificial nest after being "demovicted" from the Harbourside neighbourhood, are now raising two healthy-looking eaglets.

“Right now we’re just excited because we finally got to see them. … They're doing great,” said Sally McDermot, co-ordinator for the North Shore Eagle Network. “The monitor just sent me another video, saying they're looking stronger and more alert.”

Last summer, the City of North Vancouver, Concert Properties, the province, the Squamish Nation, the North Shore Eagle Network and Hancock Wildlife Foundation worked together to pull a switcheroo on the eagles while they were on their annual migration to feed in the North. Crews cut down the cottonwood tree they’d been nesting in to make room for the North Harbour development and put up an artificial nest about 500 metres to the north on Mosquito Creek. When the eagles returned in the fall, they took to the new nest almost immediately.

As of this spring, they are now raising two chicks.

McDermott said they could tell from the body language of the parents that the eggs had hatched, sometime around April 23. Instead of crouching down low over eggs, they were perched out on the edge of the nest, bopping their heads down in.

“They’re bringing food in,” she said. “So we know they’re feeding something.”

In another two weeks, McDermott hopes the eaglets will be visible to the naked eye. By then, they should be exploring the nest and poking their heads overtop. Around six or eight weeks, they’ll start stretching their wings in preparation for flight.

“We call that wingersizing,” McDermott said.

The baby steps continue around 10 weeks when they’ll start to hop out onto adjacent branches, ready to learn to fly.

Success is by no means a guarantee.

“That two weeks of fledge has a very high mortality rate because the eagles might fly or fall out of the nest and not be able to fly back up,” McDermott said, noting the Orphaned Wildlife Rehabilitation Society, also known as OWL, has come to rescue North Shore eaglets in trouble before.

If they get the hang of flying, they’ll probably spend another couple weeks around the nest, enjoying their last few free meals on Mom and Dad.

“After two weeks, we hope not to see them again because they have flown away … on their northern sojourn,” McDermott said.

The North Shore Eagle Network currently has 17 nests they’re monitoring, most of them along the West Vancouver waterfront because it has the best old growth trees for eagle habitat.

Volunteers have counted 18 chicks this spring, including the two in the Mosquito Creek nest.
There could be more out there, but McDermott said they only know about the ones volunteers have spotted.

“We’re always looking for anybody that’s interested in monitoring,” she said.

None of the North Shore nests have cameras trained on them 24/7 and volunteers have to glean what they can about their inhabitants while standing on the ground with binoculars or a telephoto lens. That can be tricky, especially when foliage changes and you have to search out a new vantage point, McDermott said.

The network keeps the local municipalities informed about the location of nests so they can ensure the trees are protected.

The eagle network has several other habitat rehabilitation projects they’d like to try, including establishing a new artificial nest near the mouth of the Seymour River and taking another stab at getting a pair to move into a vacant artificial nest next to Seaspan’s drydock off Low Level Road. Under the tutelage of David Hancock, a global expert in eagles, McDermott said they stand a great chance of success. They’d also like to get their hands on some cameras that can be positioned to livestream the activities inside the nests. But all of that requires money and volunteer time, McDermott noted.

Anyone who wants to report a nest or contribute to the effort can contact McDermott at mcjeffery@telus.net.

'I have NEVER seen so many eagles in the sky': Eagle-eyed photographer captures captivating convocation (VIDEO)
Feb 8, 2021 12:30 PM