Vaccination of long-term care facility residents and care workers will be 'a game-changer for us', says Dr. Bonnie Henry
Dec 17, 2020 4:35 PM By: Tyler Orton 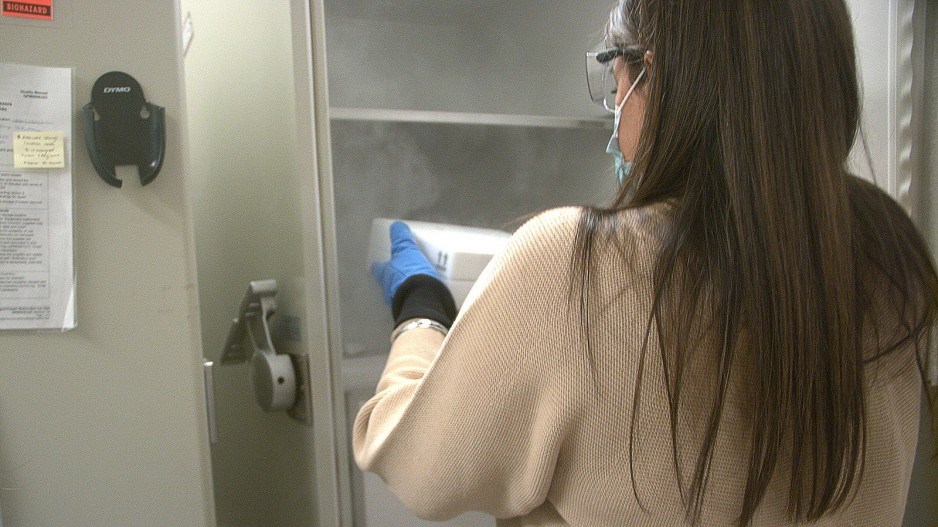 The first COVID-19 vaccine doses from Pfizer arrived in B.C. this week. The federal government expects up to 168,000 doses of the competing Moderna vaccine by the end of December. Photo by Government of B.C.

More than 1,000 British Columbians have been vaccinated against COVID-19 since the province began administering doses earlier this week.

Dr. Bonnie Henry, B.C.’s provincial health officer, confirmed that 1,215 health-care workers have received their first doses of the vaccine from Pfizer Inc. and BioNTech SE as of Wednesday (December 16).

“That is a great testament to the works of the public health clinics and to the health-care workers who have stepped up to do their best,” she said during a Thursday media briefing.

Henry added that more weekly shipments are expected to arrive next week, however, she could not provide an estimate on how many doses B.C. will receive.

“It is a moving target and we are receiving updates about the amount of vaccine and when it will be received — sometimes multiple times a day,” Henry said.

“Things are rapidly changing and timings will be provided as soon as they are confirmed.”

Vaccines have been administered at two locations in B.C. since vaccinations started Tuesday.

Both locations are in the Lower Mainland — one in the Vancouver Coastal Health Region and one in the Fraser Health Region — but Henry said the province plans on rolling out vaccinations throughout all provincial health regions beginning next week.

B.C. Health Minister Adrian Dix said the remainder of the doses received so far will be administered by the end of this week.

Henry also clarified during the briefing why the vaccine is not yet being recommended for those who are immuno-compromised:

“The clinical trials expressly excluded people with those conditions and focused on primarily healthy populations of people of different ages,” she said.

“If you’re wondering if this applies to you, the best thing to do is consult your healthcare provider.”

Up to 249,000 doses of the Pfizer vaccine are expected to be delivered to Canada by the end of December.

Another 168,000 doses of the competing Moderna Inc. vaccine are also expected to be delivered by the end of the month, pending approval from Health Canada.

But because the Pfizer vaccine must be maintained at temperatures of -80C, it’s more difficult to handle and transport.

That means the administration of the vaccine has started at clinics and has centred on health-care workers rather than residents of long-term care facilities.

The delivery of those vaccines will be handled by the manufacturer, initially in urban centres.

Right now, Pfizer requires that the vaccine is administered at the point of arrival.

“We are hopeful. We hear that it may be as early as tomorrow as [to] how it will work,” Henry said, referring to targeting immunization for long-term care facility residents and care workers at those facilities.

“That is going to be a game-changer for us.”

Because the Moderna vaccine is easier to transport — requiring freezing of only -20C — those will be prioritized for shipping in medical-grade freezers to Canada’s north as well as remote and Indigenous communities.

Henry indicated that the Moderna vaccine could be prioritized for use at long-term care facilities once it’s approved by Health Canada.

The provinces have agreed to shift the per capita proportion of Moderna vaccines to the territories to make distribution easier, meaning fewer doses of the easier-to-transport vaccine are destined for B.C.

“Because certainly in some provinces that have quote ‘northern communities,’ you can see that at the end of the day, for those communities affected that there's really not much in difference in terms of their reality on the ground as opposed to quote ‘a southern community’ in a territory [that] might be separated by a few hundred kilometres or so.”

About 380,000 British Columbians are expected to be vaccinated by the end of March.

The population of B.C. is approximately 5 million.