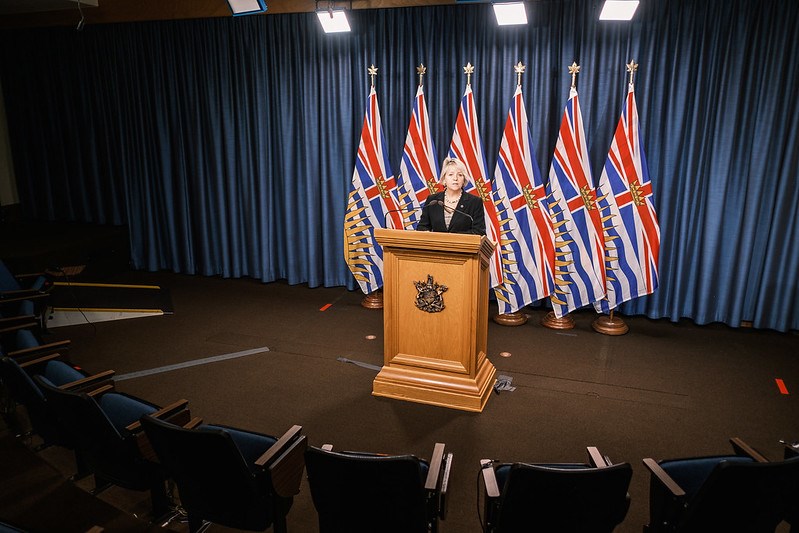 B.C.'s provincial health officer Bonnie Henry on January 4 revealed details of the province's planned rollout of vaccines to combat COVID-19 as well as new data to show the spread of the virus in the province.

The number of new daily cases moderated slightly in the latter half of December, and that trend continued, Henry said. Unfortunately, however, 45 more people have died from the virus that spawned a global pandemic, for a total of 946 since the first death in B.C. was recorded on March 9. Most of the new deaths were seniors.

The number of people with severe enough infections to be in hospital has fallen to 351, from 374 on December 31. That includes 76 people who are in intensive care units of those hospitals.

Another 8,785 people are being actively monitored for infections because of known exposure to identified cases. That number does not include anyone from Northern Health, because of data-gathering glitches, Henry said.

Henry expects to receive an additional 16,575 doses of the Pfizer-BioNTech vaccine by the end of this week, and for an unspecified number of doses of the Moderna vaccine to arrive in the third week of January.

She called some of the logistics around distributing the Pfizer-BioNTech vaccine "fussy." That vaccine must be stored at below -70 Celsius, but it also comes with restrictions on how many doses can be moved together at a time, as well as how long the does may be out of the freezer. Advanced training is required for staff for how to handle the vaccine, and special personal protective equipment, such as gloves to handle ultra-low-temperature items, is required.

The AstraZeneca vaccine has been approved in the U.K., and has started to be administered to the public. Henry said Health Canada has received some data related to AstraZeneca clinical trials and that she hopes that the Canadian government will have approved that vaccine sometime in the first quarter of 2021.

Henry  said she expects a total of 792,000 doses of vaccine – the Pfizer-BioNTech vaccine and the Moderna vaccine combined – to arrive by the end of March.

Henry said that the province has sufficient staff to administer these doses, and that the number of vaccines administered after March will ramp up further.

Henry also outlined a list of priority groups that will be eligible to get a vaccine dose. After the healthcare workers, who have already been getting vaccine doses, will be staff and residents in long-term care homes.

Other priority groups include elders in the community aged older than 80, homeless people, and those in remote and indigenous communities among others.