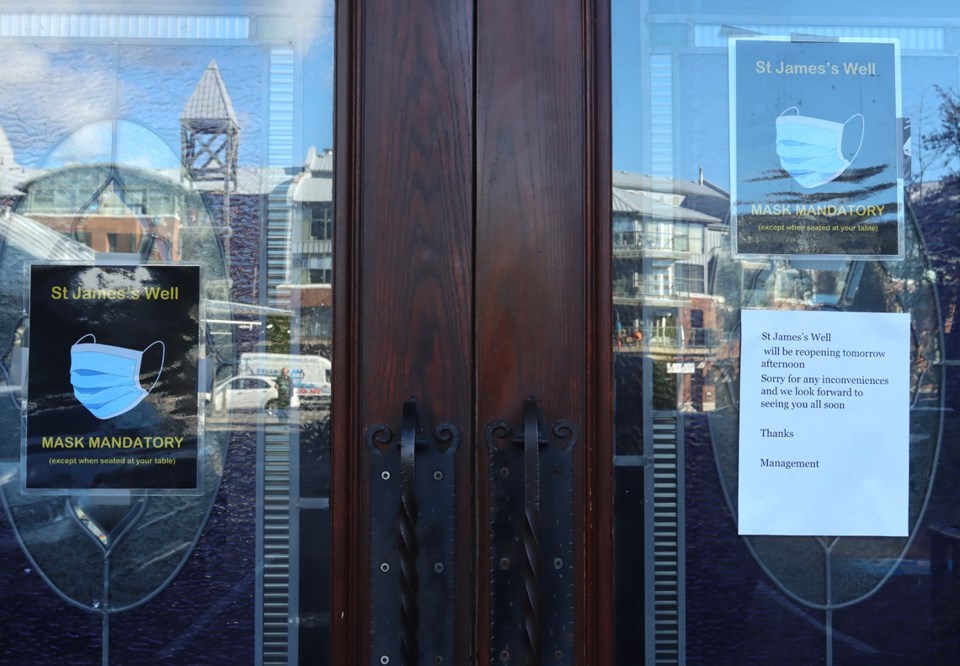 A sign on the door of St. James's Well Irish pub in Port Moody's Newport Village advises patrons of its temporary closure after a community outbreak of COVID-19 was traced to a trivia event there. MARIO BARTEL/THE TRI-CITY NEWS

When Andrew Longhurst describes his feelings these days, he used the words “angry” and “sad” a lot.

Longhurst has many reasons for feeling this way. The health researcher and SFU PhD student is coping with his wife and toddler recently testing positive for COVID-19. (He hasn’t tested positive, which he says is a “miracle” considering all three live in a 500-square-foot apartment in Vancouver.)

Longhurst’s toddler goes to the SFU Childcare Society on Burnaby Mountain. It’s the city’s largest daycare and Fraser Health has declared an outbreak there with at least 26 cases as of Thursday, according to the health authority.

Longhurst says his wife and toddler have “mild symptoms” and that the family was notified on Feb. 10 about the outbreak. They have been told they have to isolate until March 7 due to the age of their child.

“Thank God we have a good network to help us,” Longhurst told the NOW in an interview, adding that the SFU Childcare Society has been wonderful in how they have handled the outbreak.

How the outbreak started at the daycare is possibly connected to a Port Moody eatery that is feeling the heat after Fraser Health flagged it for COVID-19 exposures last week.

And while it wouldn’t link the pub outbreak to the growing caseload at the SFU Childcare Society, Fraser Health did confirm that there are 26 COVID-19 cases.

In her Tuesday press conference, provincial health officer Dr. Bonnie Henry warned that social gatherings were responsible for 40% of new COVID cases. As well, she noted that an establishment hosted 50 people for a "games night” resulting in cases at work places, schools and a child care centre.

Glacier Media has not independently confirmed that she was speaking about St. James’s Well.

“It’s conjecture at this point,” Longhurst said, but notes the timing and the statements made. “We’ve been told nothing. It makes me angry and it also makes me sad. It would be helpful if they were just honest about if this was a super-spreader event.”

Longhurst is wondering if the current outbreak is connected to a coronavirus variant, and wishes health officials would supply more information.

Beyond how the daycare outbreak was spread, what Longhurst really wants is for B.C. to start allowing the use of what is referred to as rapid tests in such places at daycares and long-term care homes. Longhurst understands the rapid tests are not 100% effective – the reason cited by Henry for why B.C. isn’t using them other than a pilot project – but he says it’s another tool that could help stop another potential wave of cases.

“This is a perfect opportunity to deploy rapid tests,” he said. “Why are we doing this to people? We have these tools, let’s use them.”

Half measures & variant-fuelled third wave—that’s the path we’re on. Seems a cruel joke that my family & others are infected & have their child care centre shut down because of bar trivia night. But we can’t muster rapid testing or paid sick leave. #bcpoli https://t.co/yOjeUR61g0

“It’s now time for B.C. to scale up its rapid testing efforts to include seniors care homes province-wide,” said BCCPA and EngAge BC CEO Terry Lake, in a news release in late January. “With 1.3 million rapid test kits purchased by the federal government currently warehoused in B.C. and ready for use, getting the kits into the hands of seniors care providers should be a top priority for preventing the spread of SARS-CoV-2 in the seniors population.”

B.C.’s first rapid test pilot – launched in early December – was conducted at five long-term care homes in Vancouver, said the BCCPA, adding that the program has “already identified multiple asymptomatic COVID-19 positive healthcare staff, including one example that prevented a potentially deadly spread of the coronavirus in a long-term care home. While no screening test is determined to be 100% accurate, rapid tests bring a critical layer of prevention against the spread of COVID-19.”