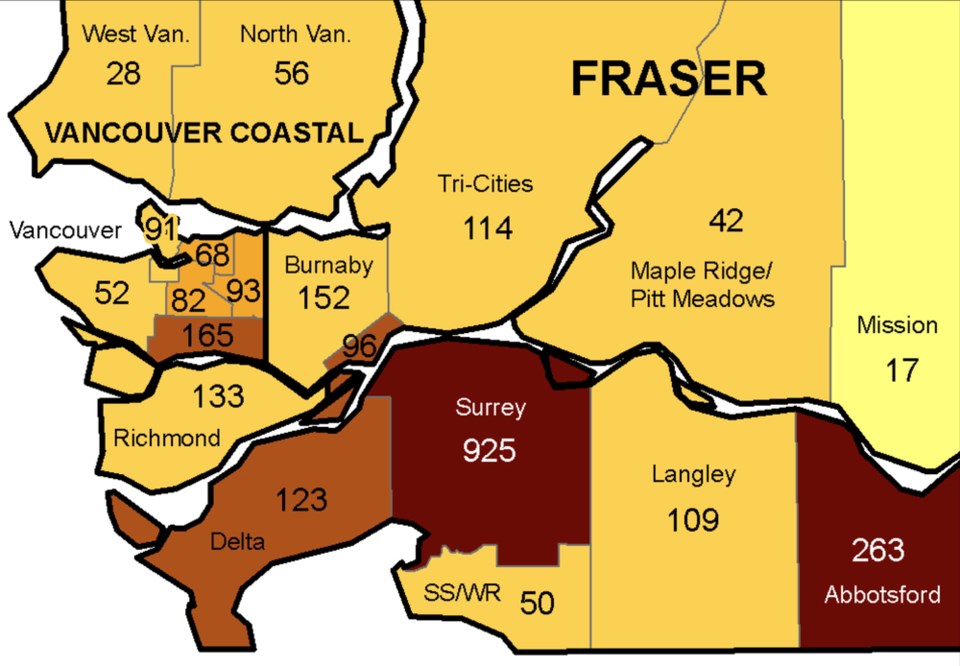 COVID-19 cases across Coquitlam, Port Coquitlam and Port Moody dipped to 114 from 128 over the last two reporting periods.BCCDC

Public health authorities have reported another 114 cases of COVID-19 across Coquitlam, Port Coquitlam and Port Moody this week, representing a slight dip from the previous reporting period.

That puts the Tri-Cities region at between five and 10 cases of COVID-19 per 100,000 people, a per-capita rate of infection roughly equal to jurisdictions like Burnaby, Richmond, Langley and the North Shore, but lower than that of Surrey, Delta and Abbotsford.

The new data, which covers the week of Jan. 3 to 9, was released by the B.C. Centre for Disease Control (BCCDC) over the weekend following a delay due to reporting errors.

New cases have dropped 11% since the last reporting period between Dec. 27 and Jan. 2, which saw 128 new cases.

A BCCDC situation report for the latest reporting period notes that while testing rates and per cent positivity were stable, “recent weeks show a decrease in testing and fluctuations in percent positivity, likely owing to changes in testing criteria and decreased testing during the holiday.”

Zooming out, provincial COVID-19 cases have decreased since their peak in November. Over a three-day period this past weekend, health authorities reported 1,330 new cases of COVID-19. In each of those days, the numbers continued a downward trajectory: dropping from 584 on Friday to 445 on Saturday and to 301 on Sunday.

Following the announcement of another 465 cases Tuesday, Jan. 19, health authorities reported 4,331 active cases across the province, with another 6,864 people under active public health monitoring as a result of identified exposure.

Another 329 people in B.C. remain in hospital due to the disease, with 70 in intensive care units, and some epidemiologists modelling the trajectory of the pandemic in B.C. have recently raised concerns over a new, highly contagious U.K. variant of the virus found in at least four cases in the province so far.

While there is no evidence the new variant is deadlier than the current version plaguing B.C., it’s documented ability to spread 50% to 70% faster has already overwhelmed hospitals across England.

The new local data also comes too early to capture the fallout from a newly declared outbreak at Eagle Ridge Manor, a long-term care facility adjacent to Eagle Ridge Hospital where a staff member and resident were announced to have tested positive for the virus on Monday.

Two other long-term care facilities in the Tri-Cities — The Madison in Coquitlam and Nicola Lodge in Port Coquitlam — continue to battle their own outbreaks.

— With files from Chuck Chiang