Maps give a colourful but not very detailed picture of COVID-19 shots, cases in the Tri-Cities

New maps show Tri-Cities's cases are down and vaccination is high among people 55 and older, but details for specific cities lacking
May 12, 2021 4:10 PM By: Diane Strandberg 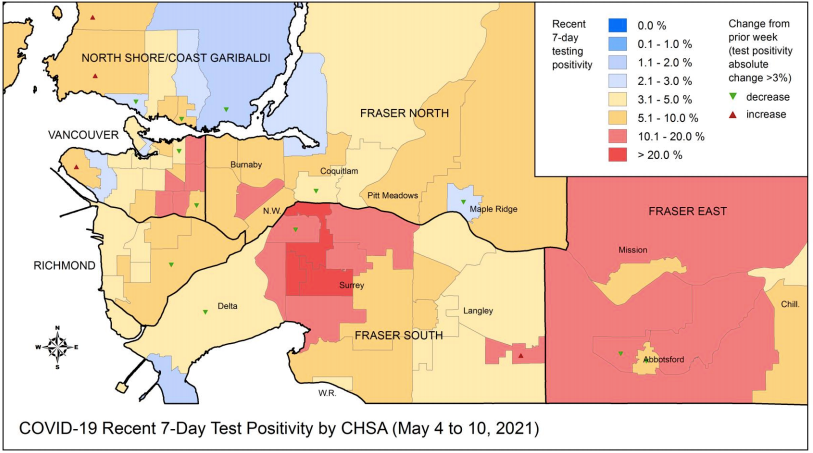 The Tri-Cities’ COVID-19 cases are dropping and vaccinations could be a major reason why, according to new maps provided by the BC Centre for Disease Control

Fewer than 200 people tested positive in the Tri-Cities in the week of May 4-10, down from more than 500 just a few weeks ago, according to one graphic, significantly lower than Surrey, where approximately 1,350 tested positive during the same period.

Positivity rates are also dropping, with Coquitlam seeing a decrease to between 3.1-5% of samples testing positive for COVID-19, some parts of Port Moody appear to be a little higher at 5.1% to 10%, although the city isn’t specifically identified by name on the map.

The information — although difficult to make out in heat maps where the cities aren’t specifically named — shows the Lower Mainland is doing well for vaccinations and lower cases counts, except for areas in east Vancouver, North Surrey, South Burnaby, and parts of Langley, Mission and Abbotsford.

The maps are being provided on the BCCDC website in the wake of leaked reports, which showed health officials in B.C. were withholding detailed data from the public.

She also said that she would be releasing more data detailing the age and sex of those infected.

BCCDC reports provided on a weekly basis detail where COVID-19 case counts are located on neighbourhood level, as well as data for where vaccinations have taken place.

Henry defended the province's procedures before she yielded and promised to release more data.

50% OF ELIGIBLE B.C RESIDENTS HAVE HAD A FIRST DOSE

Meanwhile, parsing out the specifics for each city in the Tri-Cities is not easy, as city-specific information is not provided.

For example, Port Coquitlam is not identified on the map of seven-day testing positivity but judging by the graphical presentation appears to be about 3.1-5.%, the same as Coquitlam.

Still, the maps show vaccination rates are moderately high in the Tri-Cities, but it’s difficult to tell by the maps the difference between Coquitlam, Port Moody and Port Coquitlam.

In PoCo, residents 18 and older are encouraged to book a vaccine because the area was considered a high transmission area for COVID-19. However, It's hard to make out if some areas of Port Coquitlam have low-vaccination rates — an important consideration for targeting shots.

Port Coquitlam mayor Brad West told the Tri-City News he was informed that PoCo has one of the higher rates of vaccination since the city was prioritized for shots.

According to the vaccination rate maps, the Tri-Cities appear to be doing as well as the rest of the Lower Mainland, with between 41% and 60% of residents older than 18 having been vaccinated with a single dose.

Meanwhile, the BC Ministry of Health reports that more than 50% of all eligible people in B.C. have received their first dose of COVID-19 vaccine.

Building on that momentum, Premier John Horgan is calling for everyone to register for vaccination and help friends, family and neighbours to do the same.

"We've made extraordinary progress together over the past few weeks toward everyone getting their first dose of COVID-19 vaccine," said Premier Horgan in a press release.

"COVID-19 has turned our lives upside down, but this milestone gives us hope of better days ahead. We have to keep going. We need all British Columbians to help make sure as many people as possible get their shots. Register today and talk to your friends, family and neighbours and make sure they're registered, too."

Once people are registered, they will get an email or text notification when it is their turn to book an appointment. Anyone not already registered should register now in one of three ways:

* in person at the nearest Service BC location.

People who do not have a personal health number can register by phone or in person. Translations are available in over 140 languages over the phone.

With more than one million doses arriving this month, B.C. is expected to make some  progress in its immunization plan.

According to the press release, B.C.’s COVID-19 vaccine rollout is the largest and most complex immunization program in the province's history, with more than 2,162,023 people in B.C. already having received a first dose of vaccine by May 12, 2021.

More than 2.5 million people in B.C. have registered since the Get Vaccinated provincial registration and booking system was launched on April 6.