More cases of new COVID-19 variant can be expected in B.C.: Health Ministry

“All British Columbians have to remember the virus spreads quickly but shows up slowly.”
Dec 29, 2020 10:31 AM By: Cindy E. Harnett and Katie DeRosa 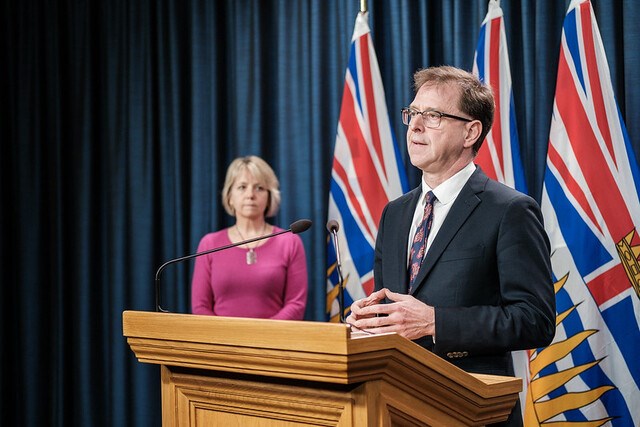 The new coronavirus variant has been found in British Columbia and more cases are expected in the coming weeks, said Adrian Dix and Dr. Bonnie Henry in a joint statement on Monday, Dec. 28. Photo via B.C. Government/Flickr

More cases of a new, highly transmissible COVID-19 variant strain are expected in B.C. in the coming weeks after the first incidence was reported on Vancouver Island over the weekend.

“While everything is being done to prevent spread to other people in the community, we do expect to see more cases of this variant in B.C. in the coming weeks, just as other jurisdictions are seeing,” a Health Ministry spokeswoman said Monday.

It’s for this reason that health officials are asking British Columbians to keep to their household members, avoid all non-essential travel, and use layers of protection including physical distancing and masks. “All British Columbians have to remember the virus spreads quickly but shows up slowly,” said provincial health officer Dr. Bonnie Henry and Health Minister Adrian Dix in a joint statement.

A pre-symptomatic person returned to B.C. on flight AC855 from London to Vancouver on Dec. 15 and developed symptoms while in quarantine, Henry and Dix said.

The Health Ministry won’t say how the person travelled to the Island or where specifically they are located.

Flight AC8265 that arrived in Nanaimo from Vancouver later that same day is also on the B.C. Centre for Disease Control’s list of COVID-19 exposures.

On Dec. 19, the person on the Dec. 15 London-Vancouver flight tested positive on Vancouver Island for COVID-19.

The person’s test sample was sent to the B.C. Centre for Disease Control on the Lower Mainland for whole genome sequencing and on Dec. 26 it was identified as positive for the U.K. variant.

The Health Ministry confirmed Henry “was not aware of a case of the variant in B.C. at the time of her Dec. 21 media availability.”

The variant, which researchers say is more contagious than previous forms of the COVID-19 virus, has caused record numbers of infections in the U.K., accounting for more than 60 per cent of cases in London. It prompted Canada to suspend flights from the U.K. Dec. 20 to Jan. 6, 2021. Other countries have taken similar action.

Alberta has also confirmed a case of the variant.

Dr. Deena Hinshaw, in her first news conference since before Christmas, said the infected person recently arrived in Alberta from the U.K. The person did everything they were supposed to upon arrival, staying isolated from others, and there is no evidence their illness has spread, she said.

Health officials in Alberta are working with the Public Health Agency of Canada to obtain a list of people who were sitting near the infected person on their flight to Alberta, she said.

The variant has been ­confirmed in three people in Ontario — a couple from ­Durham Region who had been in contact with a recent traveller from the U.K. and a person in Ottawa who had recently ­travelled from the U.K.

“B.C. continues to support the Canada-wide travel ban on all flights arriving from the U.K. until Jan. 6, 2021, and urges all British Columbians to continue to avoid all non-essential travel to keep people and communities safe,” Henry and Dix said.

As the COVID-19 pandemic evolves, so does the province’s response, but “greater restrictions are not being considered at this time,” the Health Ministry said.

“What has arisen in the U.K. is a new variant with a number of mutations, as many as 17 mutations, different changes in parts of the virus,” said Henry.

The variant strain can transmit more quickly and easily but does not seem to cause more severe illness, nor interfere with the effectiveness of vaccines, nor affect the ability of testing for the virus, she said.

Neither the province nor Island Health has updated the number of new COVID-19 cases since Dec. 24. An update is scheduled for 3 p.m. today.

— With files from The Canadian Press