The cases come as Premier John Horgan blames young people for the recent surge in infections across the British Columbia
Apr 1, 2021 11:02 AM By: Stefan Labbé 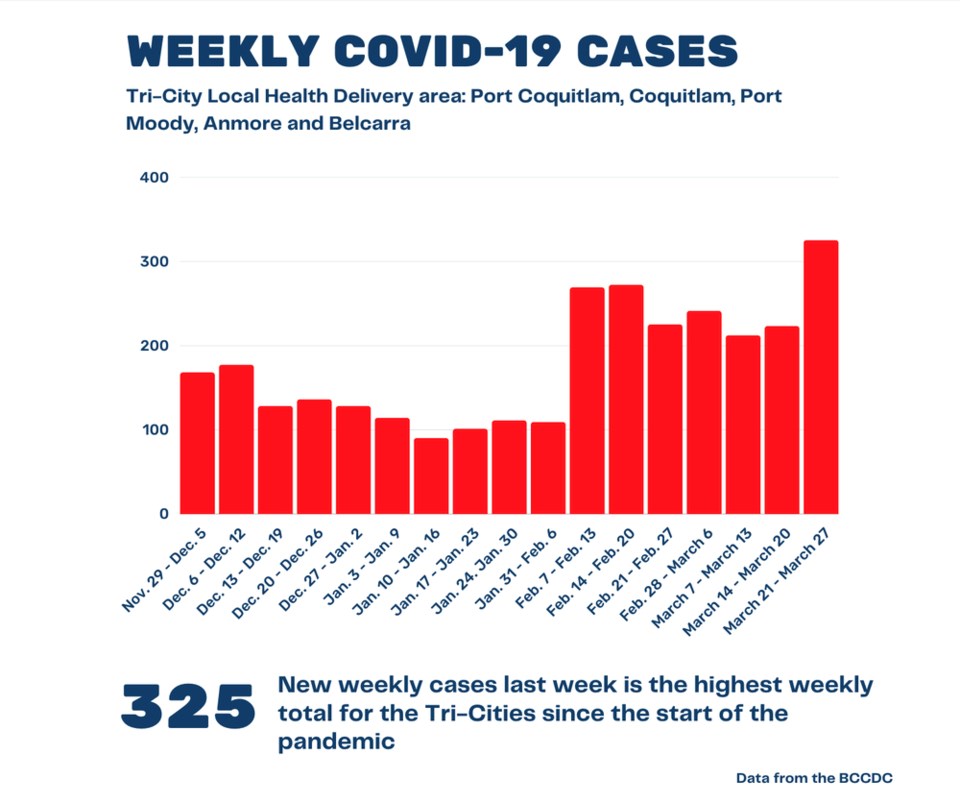 Between March 21 and 27, Coquitlam, Port Coquitlam and Port Moody registered 325 cases of COVID-19, the highest weekly total since the start of the pandemic - TRI-CITY NEWS - DATA FROM THEBCCDC

The Tri-Cities local health region saw a nearly 47% spike in COVID-19 cases last week in the largest single weekly case count since the start of the pandemic.

The 325 new cases, reported between March 21 and 27, come at a time of heightened caseloads across the Lower Mainland and province.

Last week, the Tri-Cities registered a daily average of between 15 and 20 cases per 100,000 people, an infection rate that has surged ahead of neighbouring Burnaby, but remains on par or lower than some other neighbouring municipalities.

Surrey, White Rock, Delta, West Vancouver and the western reaches of the city of Vancouver recorded the highest average daily infections rates across the Metro Vancouver over the same time period.

And this week, the upswing in cases continues to levels not seen before in B.C. On Wednesday, the provincial health officer Dr. Bonnie Henry reported 1,013 new cases of COVID-19, a new daily record and the first time the figure breached the 1,000-mark.

HORGAN BLAMES YOUNG PEOPLE BUT IS IT FAIR?

Earlier this week, Premier John Horgan cast blame on the province’s younger generations for not stemming the transmission of the virus.

On Monday, Horgan called out 20- to 39-year-olds for putting the “rest of us in a challenging situation.” Horgan said: “My appeal to you is do not blow this for the rest of us. Do not blow this for your parents, and your neighbours and others who have been working really, really hard, making significant sacrifices so we can get good outcomes for everybody.”

The premier appeared to soften his message on Tuesday, taking to Twitter to thank “the vast majority” of young people for following the rules, and saying he was trying to reach “the few” who refuse to follow public-health restrictions.

Horgan said provincial health officer Dr. Bonnie Henry has expressed concern about increasing cases in those aged 20 to 39 and said indoor social gatherings are a major factor in recent transmission.

Viral posts of a raucous party at a ski resort restaurant further incensed many, but others cast doubt on who’s to blame for the recent rise in cases across B.C.

People in their 20s and 30s have disproportionately faced some of the greatest challenges during the pandemic, including job loss, financial vulnerability, higher-risk work and impediments to launching their careers, according to Paul Kershaw, a policy professor in the school of population and public health at UBC.

Kershaw said while he thinks the premier and the province have generally done a good job managing the pandemic, Horgan’s recent comments overlooked the challenges of the past year that have disproportionately fallen on the shoulders of young adults.

“The virus has posed the greatest health risks to an older demographic, but the social distancing required to fend off the virus and prevent its spread has shifted economic vulnerability even further towards a younger demographic. And the younger demographic, in a moment of inter-generational solidarity, has stepped up to accept that,” said Kershaw, founder of Generation Squeeze, a national organization that amplifies the voices of young Canadians to address generational inequality.

Many young adults work in the service industry and have either lost work or are taking on greater risk than those who can work from home.

They’re often renters rather than homeowners, with smaller spaces and weaker financial supports from the provincial government, Kershaw said. “So there’s just added precarity for some of the younger people.”

WHAT DOES THE DATA SAY?

Meanwhile, the data tells a mixed story. Those aged 20 to 39 make up only about 30% of the total population, but have been over-represented in cases throughout the pandemic, according to 2020 data from Statistics Canada.

But data from the B.C. Centre for Disease Control indicates the demographic’s percentage of total cases has remained mostly stable when comparing Feb. 10 to Dec. 31, 2020, with the first three months of this year, increasing only slightly, from 40.7 per cent to 41.1 per cent.

As for the recent rise in weekly cases in the Tri-Cities, which age groups are most responsible for the rise in cases is not clear as the the province does not provide demographic data — or places where the cases have been appearing — at the local health area level.

—With files from Roxanne Egan-Elliott