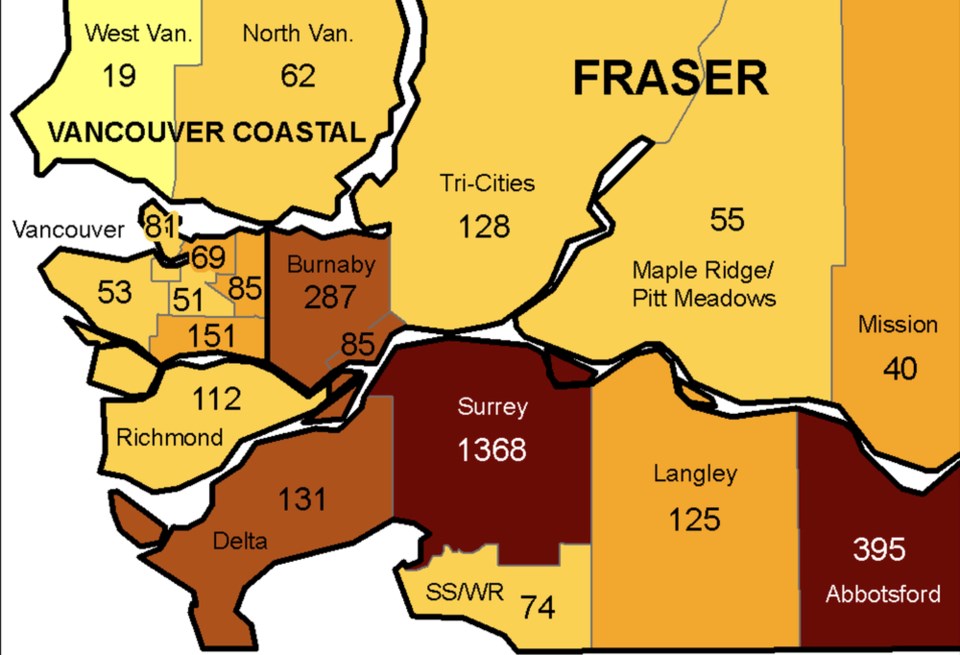 The Tri-Cities has recorded 128 more cases of COVID-19 for the week Dec. 13 to 19, echoing a downturn of new cases seen across the province in recent days.

By comparison, in the week Dec. 6 to 12, 177 cases were reported. There have now been 473 cases reported across the Tri-Cities over the first three weeks of December.

At the same time, the virus continues to circulate in the community, and three care homes across the region — Belvedere Care Centre, Lakeshore Care Centre and Nicola Lodge Care Community — continue to battle outbreaks with deadly consequences.

Since the pandemic began, the Coquitlam, Port Coquitlam and Port Moody have reported just shy of 2,000 cases of COVID-19. Per capita, that puts the region roughly on par with the Metro Vancouver suburbs of the North Shore, Maple Ridge and White Rock.

Surrey and Abbotsford remain the COVID-19 hotspots in Metro Vancouver.

On Wednesday, Dr. Bonnie Henry, the province’s medical health officer, urged everyone in B.C. to keep their Christmas celebrations small as she presented data showing the province has begun to bend its epidemiological curve back down from a peak of cases in mid-November.

Rates of new infections have started to drop in both Vancouver Coastal Health and Fraser Health, said Henry.

Henry said that shows when people comply with public health orders “those case numbers do come down. And that is incredibly important for us to recognize. But we cannot let off.”

Although hospitalization rates in the province are also levelling off, they are still at the highest level B.C. has seen all year, said Henry.

Henry said it would take very little additional social contact for the rates of infection to start dramatically climbing again.

Henry also announced some good news. Shipments of the Moderna vaccine, the second COVID-19 vaccine just approved by Health Canada, are expected to start arriving in B.C. next week.

That vaccine can be more easily transported and stored, so it will be able to be used for residents in long-term care homes and people in remote communities, said Henry.

Pfizer has also approved the transport of its vaccines to local care homes, she said.

Henry said B.C. will be concentrating on vaccinating the most vulnerable populations between now and the end of January.

— With files from Jane Seyd