"After a heartfelt speech a name was drawn and now Jack is a proud new owner of a brand new Trailblazer."
May 11, 2021 4:59 PM By: Elana Shepert 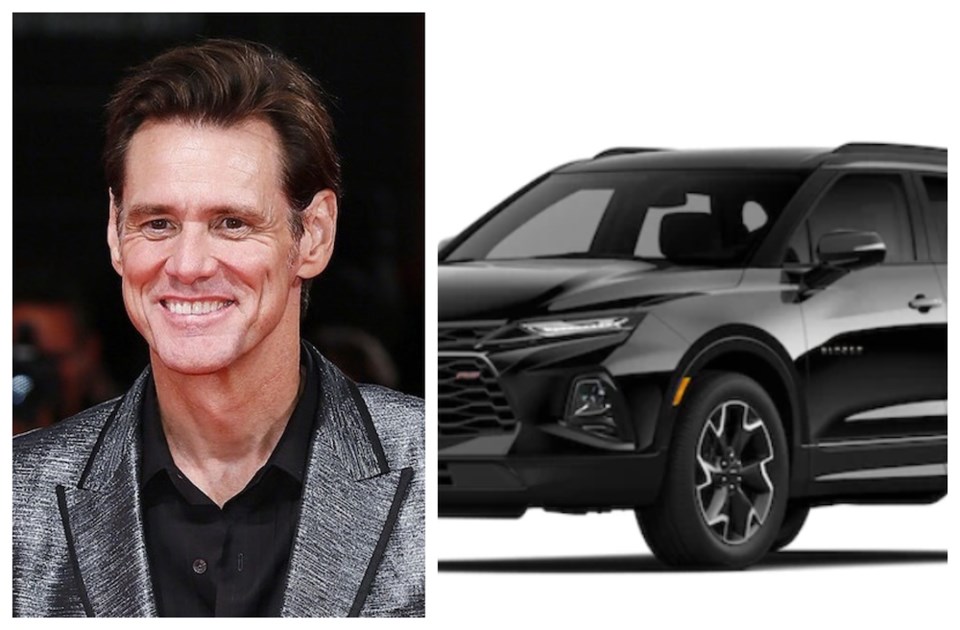 Jim Carrey has been filming Sonic the Hedgehog 2 in Metro Vancouver in May 2021 and he recently bought a Chevy Blazer RS to raffle off to the crew.Photo via jimcarreyhere / Instagram / chevrolet.com

One very lucky grip on a Metro Vancouver film set walked away with a sweet prize after winning a raffle at work.

Popular actor Jim Carrey has been spotted filming Sonic the Hedgehog 2 in the Lower Mainland over the past few weeks in Fort Langley and Cloverdale.

The funnyman stars as Robotnik in the film franchise's second instalment. The first film, Sonic the Hedgehog (2020), was about a "small-town police officer" who teams up with a blue, lightning-fast, extraterrestrial hedgehog to "defeat an evil genius who wants to do experiments" on the space critter, according to IMDb.

According to TMZ, the Canada-born actor wanted to show his appreciation to the crew of the local film crew by giving away a brand new car: a Chevy Blazer RS. The winner, who works as a grip, was reportedly announced Friday.

Fans of Carrey also spotted the Hollywood heavyweight in Fort Langley performing a stunt scene a couple of weeks ago.

Most recently, locals shared images of the film set at the Cloverdale Fairgrounds.

Whoaa last few days of filming our production and Jim Carrey made a raffle for the crew that he pulled this morning.

After a heartfelt speech a name was drawn and now Jack is a proud new owner of a brand new trailblazer #HappyFriday pic.twitter.com/BSsiApERBE

John Cena celebrated his birthday in Vancouver last week and a couple of fans gifted him a balloon. People have also photographed actors filming popular TV shows such as Riverdale, Batwoman, and Superman & Lois, just to name a few.

But not everyone is thrilled these actors flew into town to work.

In the wake of soaring coronavirus (COVID-19) cases, many locals question why these actors--many of whom are American--are permitted to work in B.C. Of course, there isn't a rule against flying into the country for work or for recreation, but the pressure is mounting on the federal government to create one.

Numerous people commented on a couple of recent stories Vancouver Is Awesome shared about American actors filming in the region. Some of them said the film industry has gone to great lengths to protect their employees and therefore doesn't pose a threat to public safety. However, others feel that their work isn't essential and shouldn't be allowed to continue during the pandemic.