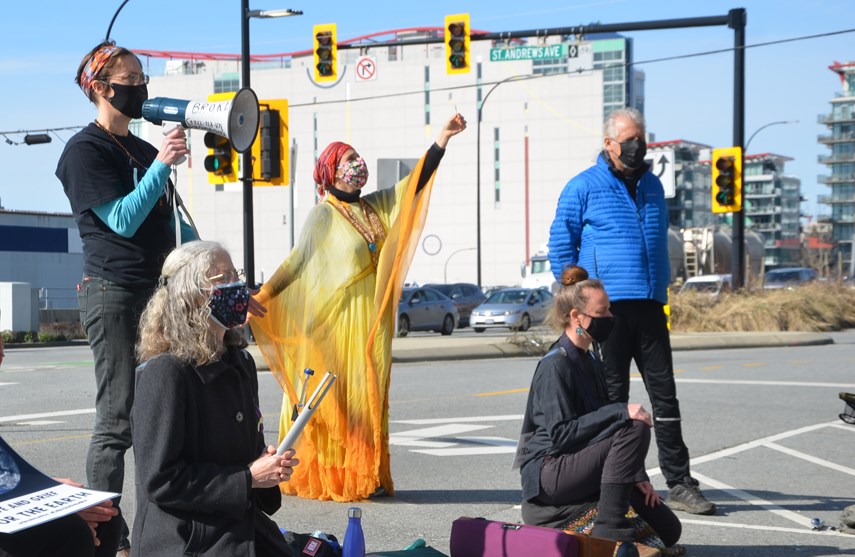 North Vancouver MP Jonathan Wilkinson’s constituency office has been the site of several protests since he was named Minister of Environment and Climate Change – but this may have been the first one involving divine providence.

More than a dozen local Buddhist, Quaker, Presbyterian, Catholic and other devout members of Greenfaith International Network held a demonstration on the street outside Wilknson's office Thursday morning. The interfaith group sang hymns. They chanted mantras. They rang standing bowls and bells, and lit candles and incense.

Organizer Christine Thuring held back tears as she initiated the ceremony at 11 a.m. – the time chosen specifically to represent the 11th hour urgency of the climate crisis.

The group cordially presented Wilkinson’s staff a list of 10 demands assembled by Greenfaith. Among them: 100 per cent renewable energy for all, net zero emissions by 2030 (20 years ahead of the current federal timeline), and welcome for climate migrants.

The group added a few specific local demands, including restoring the tarsands to boreal peat forests, returning Indigenous land in its original condition and abandoning all government subsidies and investments in fossil fuel, starting with the expansion of the Trans Mountain pipeline.

“It's a failed business model. The markets do not exist, and it's plowing through unceded Indigenous territory with colonial violence. It's completely inappropriate in this day and age,” Thuring said.

Canada’s goal to reach net-zero emissions is totally incompatible with the government's current approach, she added, and the billions of taxpayer dollars would be better spent transitioning workers to a green economy.

“Trudeau says he’s a climate leader and he’s building pipelines,” she said. “Obviously, he's just spewing lies, or he doesn't know what he's talking about, or a little bit of both. I think actions speak louder than words.”

Thuring said she does not know if Wilkinson is a religious person, but she said she holds out some hope he might be inspired.

Wilkinson was in Ottawa at the time, but, in a statement, he welcomed the protest.

“The demonstration by Greenfaith today is an important recognition that the climate crisis demands urgent and united action by Canada’s governments, community leaders, and civil society. I am heartened by the passion and dedication of those who gathered outside my constituency office today,” he said. “As Canada continues to accelerate climate action through the strengthened climate plan we released in December and our ambition to achieve net zero emissions by 2050, I very much welcome the advocacy of organizations like Greenfaith.”