Money raised has grown as more people join in the annual event to raise funds for special programs, projects
Aug 29, 2019 9:00 AM By: Grant Granger 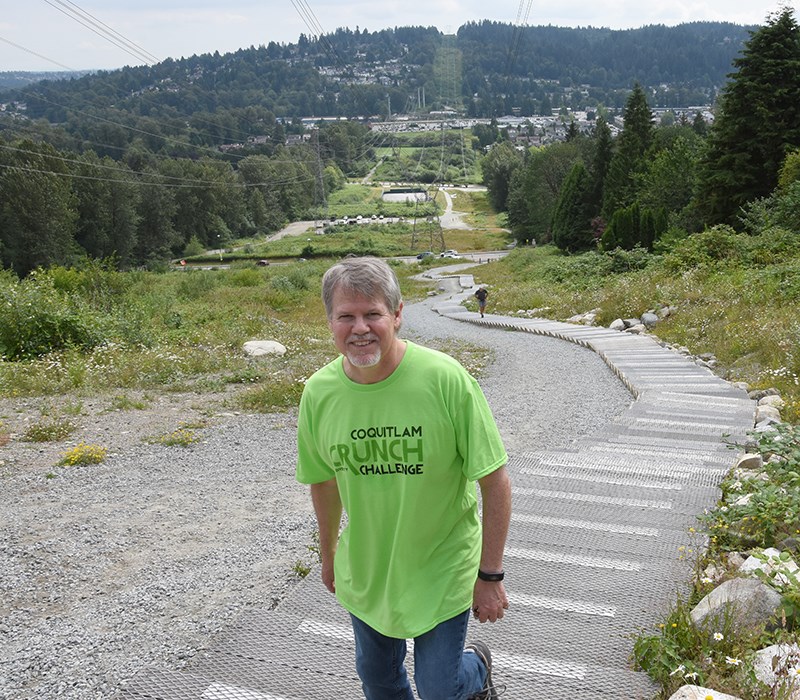 The occasion of the 10th Coquitlam Crunch Diversity Challenge Sept. 7 makes it an appropriate time to crunch some numbers. And the numbers Alex Bell has been chewing are sweet.

A decade or so ago, Bell was working in the employment business dealing with diverse groups, from seniors to immigrants. the LBGQT community to others with economic and social challenges. He wanted to set up a diversity fund for Coquitlam to help those people but needed some sort of event to raise funds. One day, he heard about a man doing the Grouse Grind multiple times in a 12-hour period.

“I thought, ‘Oh, now that’s a catch. There’s something there. Imagine doing the Coquitlam Crunch multiple times,’” Bell said on a recent sunny afternoon at the base of the Crunch — a popular walking/hiking route that runs under the power lines, from lower Eagle Ridge to Westwood Plateau.

“I don’t know what ultimately spurred me on to actually say, ‘I’m going to do this.’ I wanted a community project. I’m not sure exactly what it was and I didn’t know where it would lead to.”

What it led to was the inaugural event in 2010 with just 26 participants — some of those were volunteers and Bell did it 10 times that day — ascending and descending the 2.2-kilometre hill for half a day.

Initially, it was a slow climb. The next year, Bell estimated, the numbers were in the 40s, and the 70s the year after that. The numbers going up and down the incline got better after one number declined. That would be going from 12 to four hours in 2015, which was a year after Matt Sessions matched his 2012 record of 17 round trips. The peak was between 180 and 200 in 2017.

“Strangely enough, we found there wasn’t that many people wanting to walk up and down here for 12 hours in a row. Strange! And it was hard to find volunteers for a 12-hour day,” said Bell. “[Four hours] was much more doable.”

It also helped when the city installed stairs on much of the Crunch in 2014, and organizers added a team relay and an Anything is Possible Trail for people with a disability, which also spoke to the event’s diversity spirit.

In 2015, the challenge achieved its goal — there’s about $20,000 in the pot now — and the first grant was handed out to a Tri-Cities brain injury support group. Before conceiving of the fundraiser, Bell and his wife at the time, Laurel, were struck by a car while walking on Lansdowne and she sustained brain injuries. She had joined a support group while he did the Crunch as part of his rehabilitation.

“They were finding it a challenge to be able to get together socially. With brain injuries, it is so important to have that social connection. You can get isolated very easily. Often you lose jobs, you lose partners, you lose family because of the effects of the brain injury.

"It was something I thought, OK, that could be a way of supporting a group of people that are a diversity group socially in our community,” said Bell, who noted in recent years the grants have been spread out. “Often [groups] don’t need a lot of money, they need a bit of money. But grants can be very hard to apply for, so why not have something for the community that’s a little bit open [and] broad.”

“I didn’t know if it could go for 10 years,” said Bell. “Every time we add something, it pushes it to another level. When we started putting in timers, timing pads and computers, that meant more people, and we had to add crossing guards. It adds to the complexity.

• The 10th annual Coquitlam Crunch Challenge for Diversity will be held Saturday, Sept. 7. To register as an individual, family or team, or for The Stair Master, The Make-it-or-Break-it or the recreational categories, go to coquitlamcrunch.com. The event raises money through entrance fees, but Bell said “If [people] want to just join in and they’ve got a dollar to contribute, we won’t turn people away. If people want to contribute more, then we like that, too.”