Early on in the COVID-19 pandemic, Susan Walter thought she could be a good neighbour, rid herself of scraps of material she’d accumulated over the years and raise some money for causes close to her heart by sewing a few masks .
Sep 16, 2020 1:55 PM By: Mario Bartel 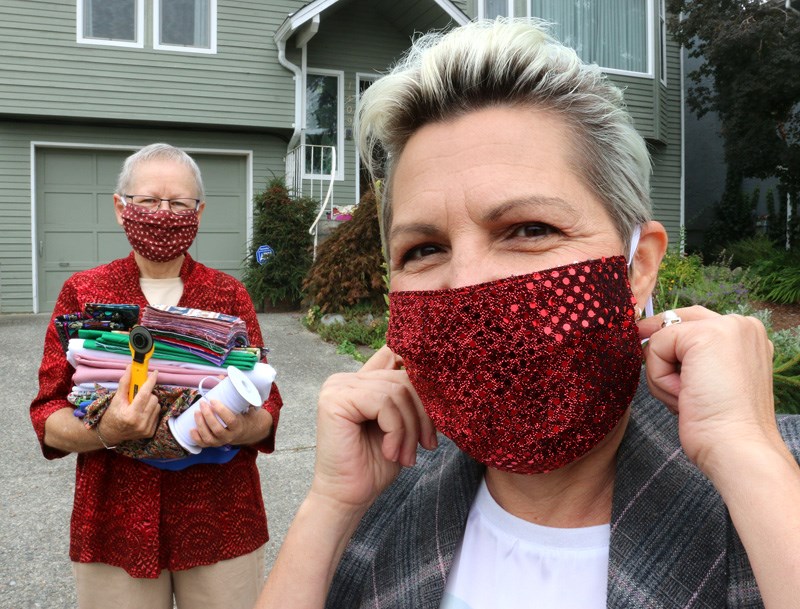 Susan Walter still has lots of bolts of material, even after she presented the 1,000th mask she's sewn since April to Coquitlam councillor Bonita Zarrillo.MARIO BARTEL/THE TRI-CITY NEWS

Early on in the COVID-19 pandemic, Susan Walter thought she could be a good neighbour, rid herself of scraps of material she’d accumulated over the years and raise some money for causes close to her heart by sewing a few masks.

Monday, the 64-year-old Coquitlam woman presented her 1,000th facial covering to city councillor Bonita Zarrillo, with whom she feels a kinship as they’re both survivors of breast cancer.

Since embarking on her mask-making project, Walter figures she’s used up about 600 metres of surplus fabric that otherwise would have gone to the landfill, and hundreds of metres of elastic, much of which was donated.

When she finishes a mask, each is placed in a plastic baggie and posted on a hanger in front of her Gabriola Road home, where anyone wandering by can help themselves. All Walter asks for in return is a donation to the Share Food Bank or the Port Moody chapter of Days for Girls, a group that assembles feminine hygiene kits for young women in developing countries. So far she estimates she’s raised more than $1,400 for the latter and untold dollars for the former.

Walter, who started sewing masks in April after public health officials recommended they be worn to help prevent the transmission of the novel coronavirus that causes COVID-19, said she never thought she’d still be making a few masks every day into September. And after a lull through mid-summer when infection rates were declining, there’s been as many visitors to her rack as ever as those numbers rise and people nervously return to school, work or using public transit.

Walter said her fingers are still limber, and the thrill she feels whenever someone stops by in front of her house to examine the day’s offerings hasn’t diminished.

Plus, she added, she still has a room full of bolts of cloth to use up.

“It’s my daily task,” Walter said, adding her sewing has filled the void of not being able to volunteer in the community.

With the weather starting to change, Walter is even thinking ahead to the Christmas season. She’s pulled out seasonal fabrics, figuring some people might be already looking for stocking stuffers.

But the prospect of dipping temperatures and rainy days has brought on a new concern she never anticipated when she started last spring. Walter is hoping someone might be able to build her a little sheltered box, much like those roadside community libraries where neighbours can share books, so her mask offerings can stay dry.

Walter said her mask endeavour has helped transform a difficult time into a happy experience that’s allowed her to meet so many new neighbours.

Port Moody's centennial celebrations for Ioco townsite coming together
May 16, 2021 7:00 AM