Making magic on the international stage 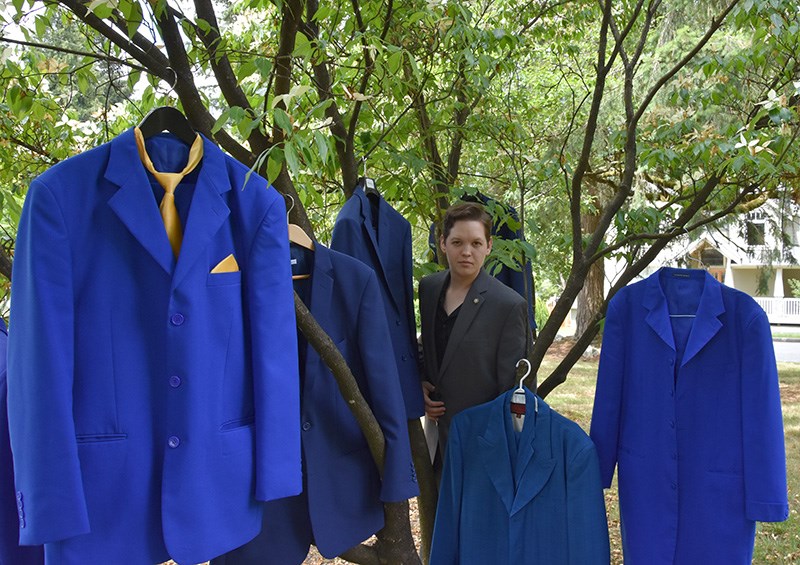 Port Coquitlam magician Alex Zander, 26, is the youngest vice president on the executive of the International Brotherhood of Magicians. The magic man is in the midst of rebranding himself, including getting rid of the trademark blue suits he's worn since he was a teenager.Grant Granger

Alex Zander has gone on a magical ride from delivering The Tri-City News with his little wagon on the hills of his Port Coquitlam Citadel Heights neighbourhood to becoming the youngest executive committee vice-president IBM has ever had. And he's in line to be its president in the next couple of years.

Wait! What? No, not that IBM, the monolithic multinational business technology company. But it is magical. This IBM is the International Brotherhood of Magicians.

Like many other kids, Zander got a magic kit when he was in kindergarten. But he lost interest in it quickly and put it away. The desire to pull the kit out of the closet didn't resurface until he was 11 years old when his family was on vacation in Victoria. They dropped into Tony's Trick and Joke Shop run by renowned magician Tony Eng. It had its fair share of the prankster staples like squirting nickels, hand buzzers and whoopee cushions. What little Alex couldn't take his eyes off of, though, was the Wall of Magic Wonders with all its oddities.

His parents and two younger brothers had other plans that day, but Alex didn't want to leave so they left him "with the magician dude."

Eng taught him a bunch of stuff, and by the time he exited he was the proud possessor of a deck of cards, sleight-of-hand sponge balls and other magic stuff. And he began to practise, practise and practise some more.

Then he found the Vancouver Magic Circle and Clownin' Around Magic Shop on Granville Island, which became his home away from home.

Within a year little Alex Seaman (Zander is a stage name) was doing local birthday parties and magic tricks socially with kids at school, although teachers would frequently confiscate his cards and props. (He went to Mary Hill elementary, Pitt River middle and Riverside secondary.)

"It was nerve wracking, but confidence building," said the 26-year-old as he animatedly fidgeted on the living room sofa of his family's home.

Originally, his prop purchases were funded by his Tri-City News twice-a-week, 58-home paper route in his hilly neighbourhood.

Soon the gigs were coming to him as parents sought him out for birthday parties and events, as well as restaurant engagements.

"There's something about magic. It resonates with people," said Zander.

When he made more money doing magic, he passed along the paper route to his brothers.

By age 18, he was a Vancouver IBM chapter sergeant at arms. Despite his youth, he produced a couple of conventions for the chapter and ran public events around town. That led to him being nominated for the IBM's executive committee in 2014. He said at the next convention in Las Vegas in July he is expected to be recommended for the position of president-elect.

"That's my passion, that's my contribution back to the craft. That's what's given me the opportunity to do what I love for a living," said Zander.

Getting established in the magic biz was a grind. It was not all spotlights and standing ovations.

"It was the hardest thing I've ever had to do," said Zander.

To protect his pocketbook long-term, Zander decided he wasn't going to be just a one-trick career chooser. He pursued work and education in the security industry and is now within one semester of earning a criminology degree from Simon Fraser University.

His work with IBM and studying the justice system — he specialized in comparative approaches in U.S. and Canadian criminal justice — has him also contemplating an eventual career in politics.

Making magic a profession, he said, is simultaneously positive and negative. "It's a constant state of flux. It's all energetic and keeps me going."

And going and going and going. Two days after the interview The News, he was off to California for a 30-day stint. He's on the road about five months a year, mostly in and around the summer season. Along with a ton of county and state fair gigs on both sides of the border, he'll be doing his annual stint at the Calgary Stampede in July.

"I come back in August to pack a new suitcase and then I'm back out again until October," said Zander. "It's super fun, and it's an aspect of life I've always wanted.

The rest of the year he keeps busy with corporate clients and many others he's developed around town.

"I like knowing that I was part of somebody's highlight or memory," he said. "The show is the fun. The work is all the other work not being on stage."

This summer's sojourns come at a time when he's rebranding himself as well. He's retiring his trademark blue suits, although that won't be hard to do since they don't fit anymore after he slimmed down considerably, in favour of a more charcoal look, although he is keeping his gold tie. He's also dumping his blue suitcase set now that he possesses a sturdier, large black case that he's coveted for a long time.

"In my perfect world world I would tour and travel the world doing magic," said Zander. "If I can continue to go each day only doing my magic, I'm living my dream."