The Port Moody Station Museum is going dark. No, it’s not closing. But it is drawing blackout drapes over the windows of the former train station.
Oct 11, 2017 8:22 AM By: Mario Bartel 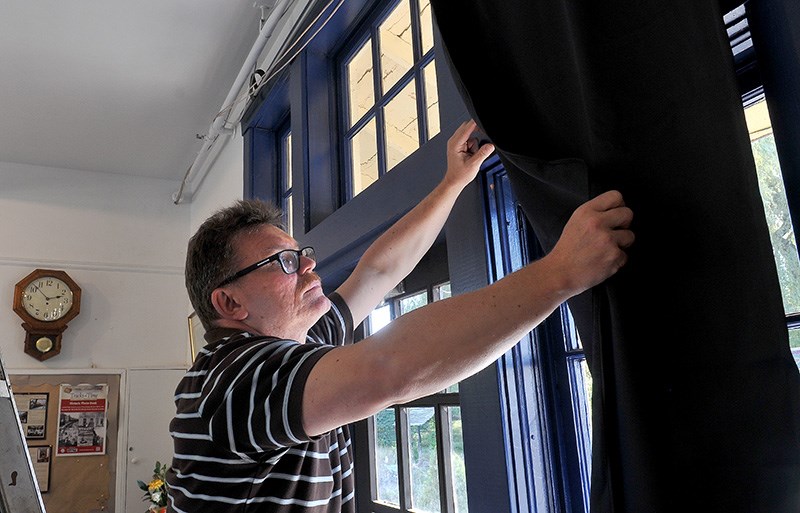 MARIO BARTEL/THE TRI-CITY NEWS Markus Fahrner, the director of the Port Moody Station Museum, begins hanging blackout drapes to cover the old train station's windows to create a light-controlled environment for a valuable album of photos, sketches and letters by Mary Moody, the wife of Colonel Richard Moody who founded the city.

No, it’s not closing.

But it is drawing blackout drapes over the windows of the former train station.

It’s all in the name of protecting a valuable and fragile artifact of Port Moody’s origins that will be on display there from Oct. 14 to Nov. 25.

A bound album of photographs, sketches and letters from Mary Moody, the wife of Colonel Richard Moody who founded the city that now bears his name, will be on loan from the Royal BC Museum in Victoria. The album documents the couple’s travels north from San Francisco and early life as they settled into the area that would become Port Moody.

And like any expectant father preparing the nest for a precious new arrival, Station Museum director Markus Fahrner is anxiously getting the old building ready.

The fragile nature of the album that dates from the 1860s, and its value as a record of provincial history, means precautions have to be taken to protect it from excessive light, temperature and humidity swings. That’s easy in a modern, purpose-built museum, but a challenge in a repurposed CPR station that was built in 1908, Fahrner said.

The old station’s expansive windows may have been great for passengers to eyeball the next train coming down the tracks, but sunlight and acidic old paper and inks don’t mix, Fahrner said.

“The big thing is it gets so bleached out, it eventually disappears from the page.”

So before Mary Moody’s album arrives from Victoria in a specially-constructed display case, Fahrner must cover all the windows in the station’s main passenger area, where it will be displayed, with heavy black drapes. He’ll also remove some of the museum’s standard light bulbs. That will bring the level of light in the room down to a dismal 50 lumens, about 10 times less bright than a 40W light bulb.

Fahrner’s also secreted digital temperature and humidity gauges all around the room which he’ll have to check regularly. And he’ll have plenty of opportunity to do that.

Fahrner said one of the Royal BC Museum’s requirements to host the Moody album is that someone from the Station Museum must be present in the room where it’s displayed at all times to ensure the room’s integrity is maintained and that nobody tries to take off with the valuable album. The photographs and sketches were acquired more than three years ago in an online auction for 12,000 British pounds (almost $20,000 CDN).

The album will be mounted in a special glass and wood case, with it’s own lighting. Every once in a while Fahrner will get the opportunity to lift the protective glass display, pull on a pair of white cotton gloves and turn a page.

Port Moody's centennial celebrations for Ioco townsite coming together
May 16, 2021 7:00 AM