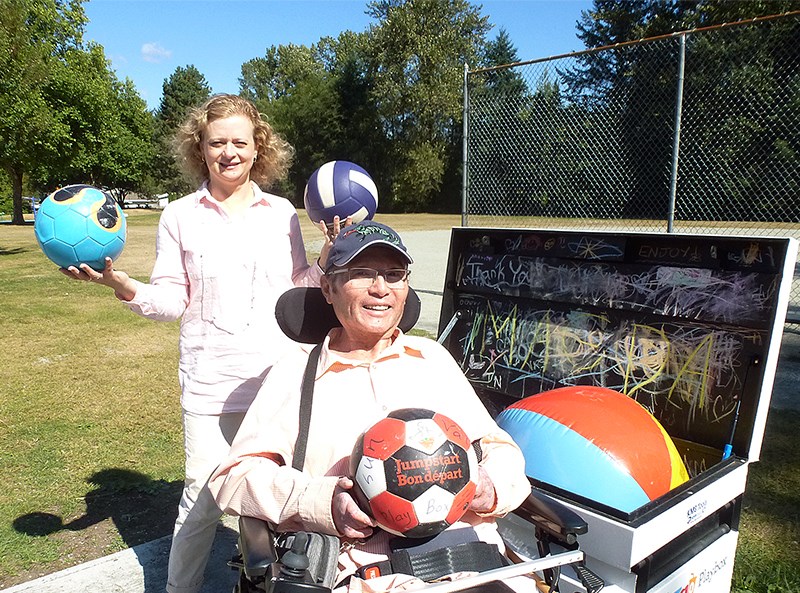 Susan Foster, with the Tri-Cities Early Childhood Development Committee, and Angelo Lam, co-ordinator for Tri-Cities Middle Childhood Matters, show off some of the equipment at the Live 5-2-1-0 Playbox located at Sun Valley Park in Port Coquitlam.Diane Strandberg

It’s been a summer of love for three new playboxes established in Port Moody and Port Coquitlam parks to keep local families fit and active.

Full of soccer balls, sidewalk chalk, hula hoops and other play equipment, these rugged boxes have taken a beating over the last month as the hot, dry summer weather held, and that’s just good news for Angelo Lam.
If they were as pristine as the day they were first opened, it would mean families weren’t using them.

Instead, it’s clear that the playboxes are popular. The one at Sun Valley Park in PoCo, for example, was missing its bubbles — likely the soap spheres had already been let loose by happy toddlers — and the inside of the box was full of crumbled chalk. There were still lots of flying disks, dodge and soccer balls to play with, and a giant beach ball was slightly deflated but useable.

“Creating an environment to make it easier for people to do physical activity, that’s our goal,” said Lam, who is the co-ordinator for Tri-Cities Middle Childhood Matters and worked on the project with the cities of PoCo and PoMo.

With about one quarter of B.C. children overweight or obese and a recent Fraser Health snapshot indicating about 50% of residents don’t get the recommended level of activity, he has a good reason to be promoting physical activity.
This year, the Tri-Cities Healthy Living working group established three playboxes, one each at Seaview and Rocky Point parks in Port Moody, the other at Sun Valley Park.

To access one of the boxes, parents or caregivers must register online (tricitiesunplug.com/play-boxes), then can get a code to open the locked box to get out the toys and play.

Early indications are that families appreciate the convenience, especially if they ride their bikes to the park, but Lam said his group wants to know more and is surveying the more than 200 participants to get their opinions about the service. The aim is to encourage families to take ownership of the boxes and become “ambassadors” for the program, ensuring they stay filled with toys while they meet other families in the neighbourhood.

Lam said the program is part of the Live 5-2-1-0 campaign to keep kids healthy; that calls for children to eat five fruits a day; limit screen time to two hours; engage in one hour of physical activity; and consume zero sugary drinks.
“We feel it was a nice fit for the program,” Lam explained, noting that the playboxes tick most of the Live 5-2-1-0 boxes.

• The Live 5-2-1-0 Playbox at Sun Valley Park will have its official opening on Tuesday, Sept. 26 from 10:30 to 11:30 a.m. For more information about healthy living, visit tricitiesunplug.com/resources.