Cyclists in the Tri-Cities are celebrating the reopening of the Sheep Paddocks Trail through Colony Farm Regional Park and a new, paved multi-use path that links Coquitlam Central SkyTrain station and Riverview Hospital.
Feb 26, 2020 8:50 AM By: Mario Bartel 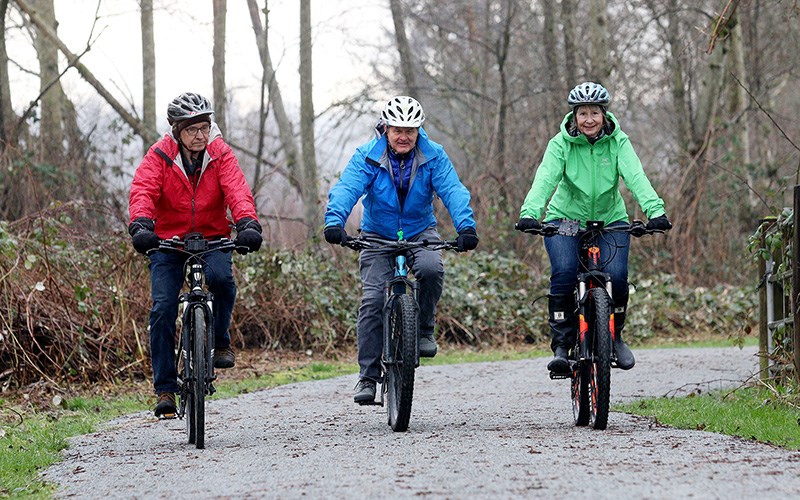 Cyclists in the Tri-Cities are celebrating the reopening of the Sheep Paddocks Trail through Colony Farm Regional Park and a new, paved multi-use path that links Coquitlam Central SkyTrain station and Riverview Hospital.

The former restores a recreational opportunity that had been closed off for years. The latter provides a new commuting option for employees at the hospital as it adds new facilities as well as for residents who live adjacent to the sprawling property.

And while the two projects aren’t officially linked, one local cycling advocate said a little imagination can help intrepid riders go a long way — and safely.

Colleen MacDonald, a Belcarra author who has published a comprehensive guide of safe, family-friendly cycling routes throughout Metro Vancouver and to the Fraser Valley, said the two trails can be bridged by a pleasant ride through the Riverview property. She added it’s now possible for cyclists to ride a complete circumnavigation of Port Coquitlam from Coquitlam Central and back with barely a concern about busy roadways and buzzing traffic.

Looking for more safe places to ride in the Tri-Cities?

Belcarra cyclists say we live in a riding mecca

If you build it, will they climb?

Léon Lebrun of Trails BC said the 1.6-km Sheep Paddocks Trail — which winds between the Coquitlam River and Lougheed Highway from Pitt River Road to Colony Farm Road — is an important link in his group’s quest to join several networks of trails so cyclists can traverse the entirety of the Lower Mainland, from east to west without having to navigate increasingly congested roads.

Sheep Paddocks Trail had been closed for several years because of erosion issues and frequent flooding. The $3.4-million Metro Vancouver project to rebuild the trail on higher terrain as well as restore the riverbank and enhance wetland began in 2017 after a lengthy delay to secure permits and permissions from the provincial government, CP Rail and BC Hydro.

MacDonald said the 25 km PoCo Traboulay Trail, of which Sheep Paddocks is a component, is one of the most popular destinations in her book, Let’s Go Biking! She said its accessibility to a busy urban area, abundance and variety of scenery as it winds through woods, shoulders the Fraser, Pitt and Coquitlam rivers, and opens up to expansive mountain vistas, as well as its consistent flatness, makes it attractive to families and cyclists of all ages and abilities who happily share the wide path with hikers, runners and birders.