A Good Read: Explore magical mysteries and UFOs in books

Have you been searching for serious and reliable information about the unexplained phenomenon of UFOs? Coquitlam librarian Heather Hortness has some answers...
Apr 27, 2016 7:17 AM By: Tri-City News 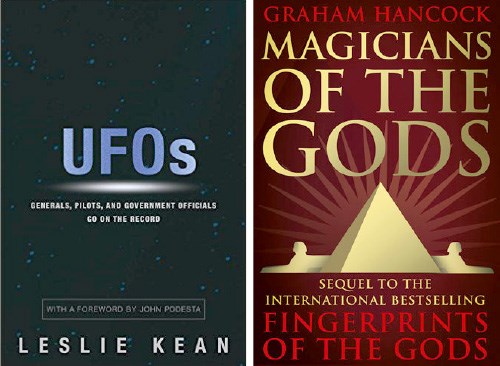 Strange objects in the sky displaying manoeuvres that are out of this world. Ancient structures built with stones weighing hundreds of tons.

Learn about the world’s greatest mysteries with these fascinating library resources:

Have you been searching for serious and reliable information about the unexplained phenomenon of UFOs? In UFOs: Generals, Pilots and Government Officials go on the Record, investigative reporter Leslie Kean takes a refreshingly factual approach. Kean reviewed government documents, aviation reports, radar data, and photographs; and interviewed high-level officials and aviation witnesses from around the world. Kean delivers the facts and reaches a startling conclusion about these mysterious objects, which have now been officially acknowledged.

Eager to explore UFOs further? Pop some popcorn, sit back and enjoy watching the award-winning documentary Out of the Blue: The Definitive Investigation of the UFO Phenomenon. The film’s producers travelled around the world to investigate some of the most famous UFO accounts. Watch interviews with high-ranking military and government personnel, and discover the newest information and theories.

Now let’s delve into our ancient history with Mysteries of the Ancient Past. This compelling collection of essays by various authors provides cutting-edge theories on such topics as secrets hidden in the Vedic literature, the architecture of the Giza pyramids and Sphinx, pre-Columbian America, and unified theories of physics and consciousness. Explore the advanced wisdom of the ancients, which seems to correspond with modern discoveries.

Graham Hancock’s bestseller Fingerprints of the Gods is an astounding investigation of the evidence for an ancient lost civilization. The author returns with new scientific and archaeological evidence in Magicians of the Gods. At the end of the last Ice Age, fragments of a comet may have struck Earth, causing cataclysms and the global flood that is described in worldwide myths. Evidence suggests an advanced civilization was destroyed, with survivors settling at key locations around the world. Unfortunately, the comet may not be done with us yet.

Perhaps you’re in the mood for a more general work. If so, The Big Book of Mysteries by Lionel and Patricia Fanthorpe may be just what you need. Learn about secret societies, lost treasures, legendary monsters and more.

Delve into the world of the mysterious with these resources available at your library.

A Good Read is a column by Tri-City librarians that is published on Wednesdays. Heather Hortness works at Coquitlam Public Library.