Book of the Week: Elevation 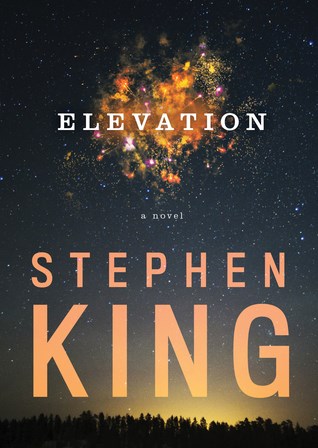 As the first couple of pounds melted away, Scott didn’t really feel any different.

He certainly looked the same.

He only started to get concerned when he realized that no matter what he wore, what he ate or which scale he stood on, the numbers kept steadily decreasing.

Even his old friend Doctor Bob Ellis was at a loss.

Despite the perplexity of his rapid weight loss and stubbornly robust waist line, Scott manages to entangle himself in neighbourly dispute with the “ladies” next door.

When local gossip starts to spread, Scott becomes aware that the “nice folks of Castle Rock” are not as kind as they claim to be and that they believe his married neighbours are “not nice lady lesbeans” who must be ignorant or stupid to think that they might be welcome in the conservative Republican town.

The pounds keep floating away and Scott becomes afraid he just might just drift away with them but, before that happens, he sets out to make peace with his neighbours.

Elevation is not a typical Stephen King horror story. The novelette explores embedded prejudices in an atmosphere enshrouded with mystery and the supernatural.

Although the notion that Scott is needed to save the women’s business and reputation verges on patriarchal, Elevation is a touching story of friendship and letting go.

1562
‘What are they waiting for?’ asks Coquitlam parent worried about long wait for school isolation letter
1544
Parent says Port Moody minor hockey not giving a full account of its COVID cases
1169
New garden centre hopes to take root in Port Moody
1153
Every Canadian household to get free, pre-paid postcard
1127
Dentists, midwives and more approved to assist in B.C. vaccination clinics