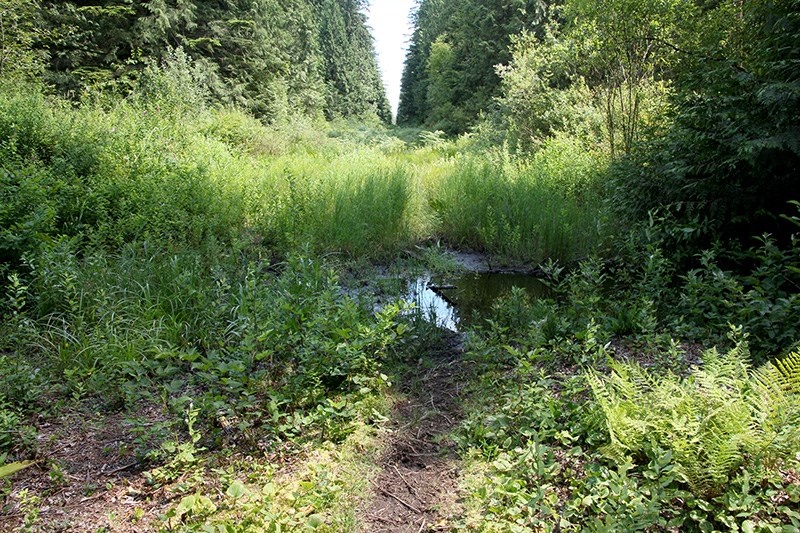 Back in 1996, the city of Port Moody was getting ready to develop residential areas on its north shore. With the so-called Neighbourhoods 1 and 2 already built out or under construction on Heritage Mountain, plans were being drawn up for Neighbourhoods 3 and 4 in a forested area to the west.

Residents in the Pleasantside community of Port Moody were dismayed at the possible loss of the forests above them and initiated a number of walks for members of the public. It was on one of these walks that wetland areas along what was then the BC Gas right of way were pointed out to me.

I quickly became enchanted by these wetlands and spent much time exploring them. I learned they are, in fact, really bogs, complete with peat moss beneath them. At that time, public pressure to protect Burns Bog in Delta was one of the emerging issues of the day (80% of Burns Bog was finally protected as an Ecological Conservancy in 2005), so discovering a similar but much smaller area in Port Moody was timely.

I was delighted to observe many of the plant characteristic of Burns Bog were also present in Port Moody’s wetlands. These included Pacific crab apple, Labrador tea, western bog-laurel, gentian, northern starflower and carnivorous sundew. In addition, I found red-legged frogs, a species subsequently deemed to be at risk and known to breed in bogs.

Thus, I became adamantly opposed to the 1966 plans to convert this wetland gem into playing fields for a proposed school in the new areas of Neighbourhoods 3 and 4.

The campaign to protect this area and avoid urban sprawl garnered such huge support in Port Moody that it was declared as Bert Flinn Park following a 1999 referendum.

But this 126-hectare park came with a compromise. Because the Imperial Oil lands further west might eventually be developed, the park was created with a road right-of-way through it to facilitate that development and thereby avoid additional traffic on Ioco Road. At the time, it seemed to be a very distant threat to the integrity of the area — and one for future generations to determine.

In the two decades since the first battle to protect this area, its wetlands, forest and extensive trails have become a popular place for recreation. The city has installed boardwalks to protect some of the wetter parts of the Park. Still, most of the critical wetland habitat lies along what is now the Fortis gas pipeline right of way. In fact, if not for the regular clearing required for the pipeline, the wetlands would be evolving into a forest.

Studies showed the layer of peat mosses is up to 10 feet deep, which indicates these bogs have likely been slowly forming since the time of the last ice age.

They presumably started as slight depressions that collected water. There are, in fact, two bogs; the larger three-hectare one has more extensive peat and is slightly more acidic. Of course the size of these wetlands varies seasonally. During unusually dry summers, they disappear.

The larger bog drains mainly north into Mossom Creek, an important salmon-bearing stream, although some overland flow during the wettest periods goes to Hett Creek. The smaller 0.8-hectare wetland drains entirely to Hett Creek, an ephemeral stream that flows south to Burrard Inlet.

The larger bog was once more extensive but some filling of it has occurred on private property in Anmore. Sadly, this is often the fate of bogs in urban areas.

In addition to red-legged frogs, tree frogs and salamanders breed in these wetlands. For all these species, it is always a race against time to develop into adults before the wetlands dry. Last year, with an extensive drought, it was a race most of these species probably lost.

As the wetlands dry seasonally, it becomes possible for people and their dogs to walk or cycle directly through them. Such traffic damages the fragile vegetation. For example, I can no longer find gentian blooming in these bogs. Nonetheless, I always felt this area, with its surrounding forests, was perfect for our native frogs. Wetlands are required for tadpole development but, as adults, these frogs require adjacent forests with a damp understorey.

With plans for development of the 94-hectare former Imperial Oil lands now underway, the threat of a major road through Bert Flinn Park has re-emerged.

Is there a solution that could avoid a road through the park? For example, is there an option to create a road entirely through Anmore in which about two thirds of this land parcel is located? This might also help to minimize impacts on Mossom Creek since the required bridge crossing would be further upstream.

If the existing right-of-way is used could it be partly or entirely covered in a tunnel so that wildlife and people could move freely between the bisected Park?

Once again, the people of Port Moody face a challenge to find a solution to this dilemma.

--Elaine Golds is a Port Moody environmentalist who is president and conservation chair of the Burke Mountain Naturalists, and member of the boards of the Colony Farm Park Association and the Port Moody Ecological Society.