The Tri-City News catches up with some of the stories we told early in the COVID-19 pandemic to see how people got through the past year, and the things they learned from their experiences. Darren Lee reinvigorated his career as an Elvis tribute artist.
Dec 31, 2020 10:05 AM By: Mario Bartel 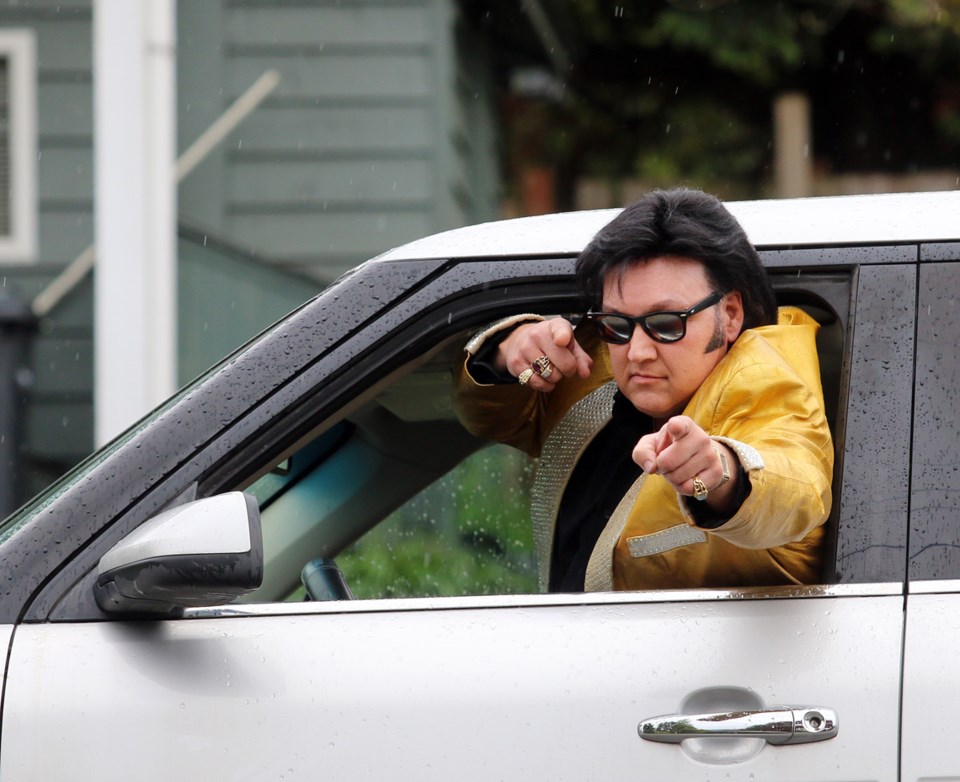 Elvis may have left the building. But he never left Darren Lee’s heart.

It took a pandemic to bring the King back to life.

A year ago, Lee, a Coquitlam tribute artist, was down and out. His 32-year career impersonating Elvis Presley in theatres, show lounges and international competitions from Maui to Nashville had hit the skids. Instead he was driving deliveries for a restaurant supply company.

But when the COVID-19 pandemic hit, even that was in jeopardy as eating establishments were forced to close. Only deliveries of hand sanitizer kept Lee going.

To pass the time as he criss-crossed the Lower Mainland, Lee played his backup tracks on the car stereo and sang along, streaming his impromptu performances from his phone so others could watch on Facebook Live.

A friend invited Lee to perform curbside in her Port Coquitlam neighbourhood to enliven their regular outdoor, socially distanced get-togethers.

Since then, Lee performed 58 shows, from May to the end of November.

He played Elvis in front yards, back yards, cul-de-sacs, back alleys, in front of retirement homes where residents watched from their balconies.

Once, he was invited to sing for a woman’s birthday celebration in Port Moody’s Newport Village. The police showed up as he serenaded her from the sidewalk below her condo unit, but they allowed him to play on.

Along with his amp and microphone, Lee put out a container to collect “tips.” He said he earned enough to be able to book the Orpheum Theatre in Vancouver for a proper comeback performance when the pandemic is over and live music venues are allowed to operate again.

With the onset of colder, rainy weather and Lee’s outdoor shows no longer possible, he’s offering performances on YouTube and he’s started a singing telegram service called Elvis Greeters, in which he creates special personalized music videos with an Elvis twist.

“The music of Elvis is international,” Lee said. “Everyone loves it.”

Lee said the pandemic — as well as personal challenges that included a heart attack in August — showed him the importance of finding joy in the darkness.