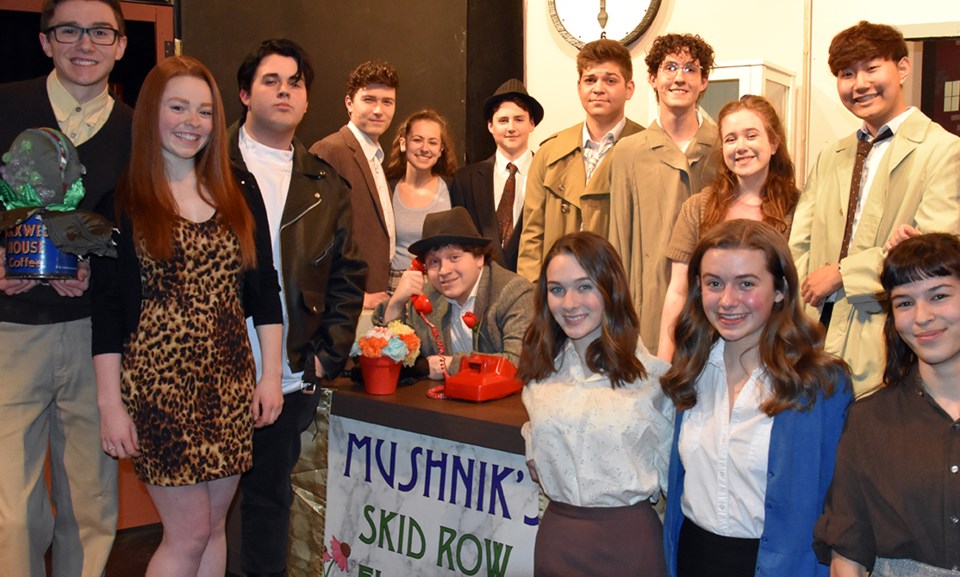 It was their first collaboration, before they teamed up to create songs for Disney’s The Little Mermaid, Beauty and the Beast and Aladdin.

Lyricist Howard Ashman and composer Alan Menken’s partnership in 1982 for the off-Broadway musical Little Shop of Horrors — based on the low-budget 1960 flick of the same name — resulted in a powerful score, producing such tunes as Feed Me, Skid Row and Suddenly Seymour.

The black comedy is a delight to direct, said Dr. Charles Best drama teacher Brad Case and music instructor Brent Hughes, who leads 11 students in his orchestra during the show run over the next two weeks at the Coquitlam high school.

But though they had 40 students to make the sets and organize the technical production, it’s the Best Players’ smallest cast to date with 13 actors — about half the number as in past productions.

There’s a lot of talent on stage, Hughes said while singling out Grade 11 student Kyra Leroux who portrays the star Audrey and is the show choreographer.

Her character “is a girl struggling to find her way on Skid Row,” said Leroux during a tech rehearsal on Monday — the day before she turned 17. Audrey works in a flower shop with the despondent Seymour Krelborn (played by Grade 11 student James Ross) who names an unusual plant in honour of his work crush.

Audrey II, as the plant is called, turns out to have great vocal cords; however, it’s also vile and sucks human blood.

It also promises Seymour fame and fortune as long as he feeds it fresh victims.

“There’s a lot of surprise elements in the show,” said Case without giving away any hints about the props.

Leroux, who based her original steps on the 2006 flick Dreamgirls and on moves by the 1960s Motown group The Supremes, is no stranger to the stage.

A former student of Lindbjerg Academy of Performing Arts in Coquitlam who is now represented by DaCosta Talent, Leroux has performed with Gateway Theatre (Gracie Shinn in The Music Man); Bring on Tomorrow (Kendra in 13-The Musical); and Theatre Under the Stars (ensemble role in 42nd Street).

This summer, Leroux is cast as Buttons in TUTS’ Newsies.

The triple threat also has numerous film and television credits including on Riverdale, Once Upon A Time and Psych.

“Performing is my passion,” said Leroux, who played Kim MacAfee in Best’s last musical, Bye Bye Birdie. “And for Little Shop, it’s been a lot of fun. We’re a family and everybody has been so supportive.”

1566
‘What are they waiting for?’ asks Coquitlam parent worried about long wait for school isolation letter
1549
Parent says Port Moody minor hockey not giving a full account of its COVID cases
1177
New garden centre hopes to take root in Port Moody
1157
Every Canadian household to get free, pre-paid postcard
1131
Dentists, midwives and more approved to assist in B.C. vaccination clinics