An ancient Japanese paper art in a Coquitlam gallery

The opening reception for Nature on Parade is Friday at Place des Arts in Coquitlam.
Feb 6, 2017 1:15 PM By: Janis Cleugh 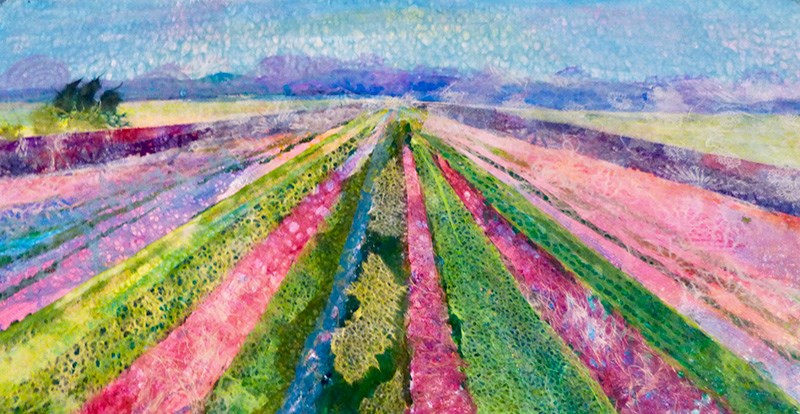 In 1984, after splitting from her husband, Roxsane Tiernan took a trip that would change her life.

A longtime Girl Guide, Tiernan visited a fellow Girl Scout leader in Japan who arranged a number of activities during her stay.

One of them was a two-hour session with Japanese housewives to learn about the ancient art form of chigiri-e.

Tiernan caught on quickly during her 20-minute introduction and made a collage of a dogwood blossom on a branch, from torn dyed paper.

But at the end of the class — when the instructor asked her to return the following week to make an image of grapes — Tiernan declined.

She felt she had already grasped the technique. “I didn’t want to make grapes anyway,” the Burnaby resident recalled, during an interview last Friday. “Grapes weren’t on my list of things to do at all.”

Instead, she searched for Washii paper to make images on her own; however, that hunt proved to be quite difficult: No one in Japan wanted to sell her the delicate textile. Rather, they offered her heavier, decorated paper — ones suitable for making Japanese paper dolls.

After six weeks, Tiernan finally found a Japanese retailer who would sell her what she wanted.

Back at home in Canada, the search for Washii paper continued to be a challenge. Today, Tiernan said when she discovers it, she buys it in bulk. “I can spend up to $800 in 20 minutes,” she laughed.

Washii paper is extraordinarily fine, “so much so that a piece that’s half the thickness of Kleenex can be seen with soft cloud shapes in it,” she said.

Unlike with chigiri-e images in Japan, Tiernan creates an entire scene rather than just part of a picture. She draws her inspiration from photos she has snapped around the world. Next month, she and her daughter will travel to New Mexico to uncover new content, textures and light, she said.

On Friday, Tiernan will open a solo exhibit called Nature on Parade to show 20 pieces — 12 of them chigiri-e — in the Mezzanine Gallery at Place des Arts in Coquitlam.

Also opening that night is Diaspora and Displacement, a mixed media display on cradle panel by Lori Bagneres. The artists will be in attendance and admission is free. Both exhibits close March 11.

• The opening reception for Nature on Parade and Diaspora and Displacement is Friday, Feb. 10 at 7 p.m. at Place des Arts (1120 Brunette Ave., Coquitlam). Visit placedesarts.ca.