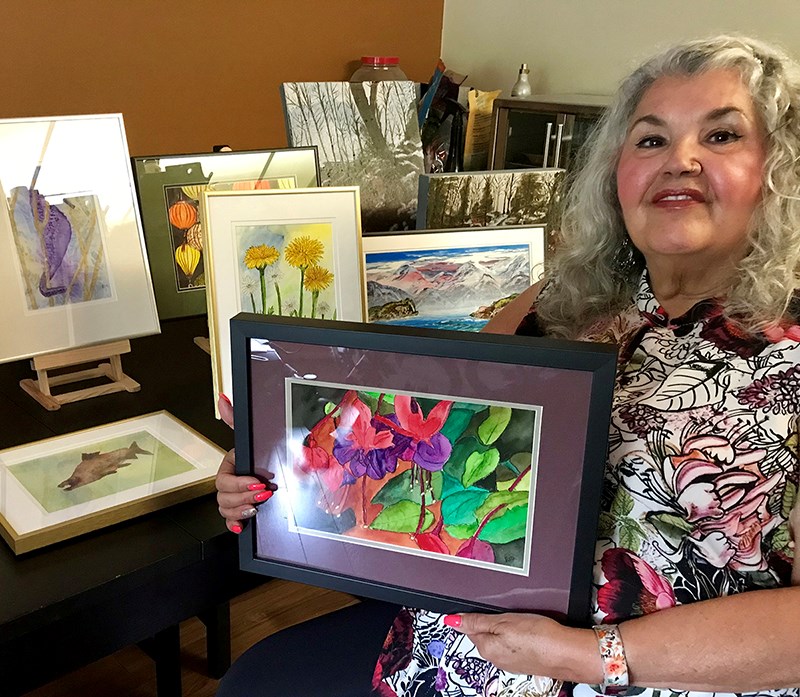 Rita Thomas at home in Coquitlam, surrounded by her artwork.JANIS CLEUGH/THE TRI-CITY NEWS

As a child in Holland, she studied visual arts and was inspired by her artist aunt, who secured her a spot at a post-secondary art institution that awarded the girl a scholarship.

But Thomas’ military father banned his daughter from enrolling, believing she ought to pursue a more steady, less carefree career.

Instead, with the help of her grandmother, Thomas got her licence in hairstyling, a path she also continued after landing in Canada at the age of 18.

In between her work, married life and raising three daughters, Thomas dabbled in art on the side for two decades until she plucked up the courage to apply to what is now known as the Emily Carr University of Art + Design (ECUAD).

After three interviews, Thomas got her acceptance letter to enrol in its four-year printmaking diploma stream.

There, she also learned other mediums such as painting in watercolours and acrylics as well as art history to solidify her foundations in the fine arts.

After she retired following 50 years of hairdressing (her last job was at Angelo’s Salon and Spa in Port Moody), Thomas became an art student again, dipping into classes at Coquitlam’s Dogwood Pavilion; four years ago, she also joined the Coquitlam Art Club, which meets on Wednesdays at the seniors’ centre.

Those lessons, especially from David Myles (watercolour), Randy Green (pen and ink), Hazel Graveness (painting) and Eileen Harder (acrylics), have not only been a creative and social outlet for Thomas but, also, a lifeline.

For two afternoons a week, Thomas heads to Dogwood to give her time to paint and relief from the full-time caregiving she offers to her common-law spouse of eight years, a former Vancouver butcher who became quadruple amputee after meningitis suddenly took his limbs.

Members of the Coquitlam Art Club were especially kind following his illness, she said, and made a donation to the family to help pay for his prosthetic legs.

While he receives respite care twice a week, Thomas said she “escapes” into the world where she always dreamed of belonging.

“If I had my scholarship and did what I was supposed to do from the beginning, I probably would have been very successful,” she said.

This weekend, Thomas will have 15 pieces on display — and some to sell — at the Coquitlam Art Club’s annual exhibit, which runs in the Centennial Pavilion (next to Dogwood Pavilion, at 620 Poirier St.) on Saturday from 9 a.m. to 4 p.m. and Sunday from 9 a.m. to 3 p.m.

Her images, which she bases off sketches and photos, are primarily landscapes and animals.

Thomas said she’s supported in her craft by her family (her daughter, Kristie, will travel from Ontario to see her mom and the weekend art show) and by her Dogwood and art club instructors.

“The people in my class are absolutely wonderful,” she said. “And I think the teachers are just as good as at Emily Carr. They’ve given me the skills to be a better artist. And they’ve given me freedom.”