Nathan McTaggart, a Grade 4 student at Coquitlam's Harbour View elementary, wrote the book with his dad, Keven, and his fellow students illustrated the story.
Dec 1, 2016 3:35 PM By: Diane Strandberg 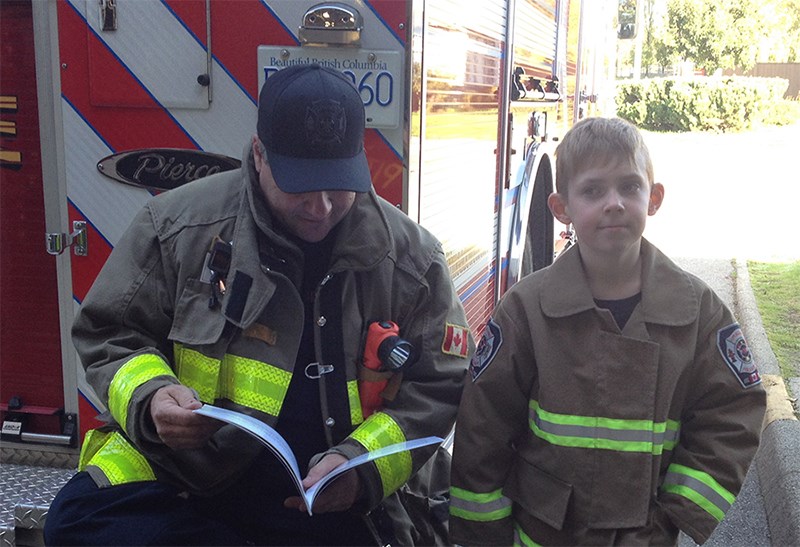 Nathan McTaggart, author of Santa and his Super Hero, with a firefighter.

A bedtime story and a fascination with the job of firefighting has turned into a local best-selling book with proceeds to the BC Professional Fire Fighters' Burn Fund.

Nathan McTaggart, a Grade 4 student at Coquitlam's Harbour View elementary, wrote the book with his dad, Keven, and his fellow students illustrated the story.

Nathan told The News that his interest in firefighters started when he was just three and saw a fire truck at a television food bank fundraiser. At the time he described the first responders as his super heroes, an idea which naturally led to a series of fun bedtime stories.

"They are super heroes because they help people a lot," McTaggart said.

Dad, Keven, said the family has always contributed to the food bank and Nathan grew up with the idea that giving to others was important. When the two discussed the idea of turning their bedtime Santa super hero story into a fundraiser for the firefighters's burn fund it was a no-brainer.

"When he said he wanted to give to charity, I thought: 'let's get this done."

They wrote the story, and Nathan's class did the illustrations last year, and the book was recently self-published and is now available online, with net proceeds to the firefighter's charity.

It recounts the story of Santa and his head elf, Zippy, who have a lot of adventures on Christmas Eve, but eventually Santa has to be rescued by fire fighters. In addition to supporting the burn fund, the book also contains some fire safety tips.

Nathan said the burn fund is important to support because it helps people severely injured in a fire.

The book has also led Nathan and his dad on a tour of 30 fire halls in Canada, the U.S. and Mexico, including the New York fire hall. At each station, firefighters sign his book.

Nathan isn't sure he wants to be a firefighter when he grows up because "of heights", but he admires the work they do to on the job. As for why he wanted to visit 30 fire halls in three nations, the 10-year-old said simply:

"It's just so I could learn more and have a big experience and it's about adventuring."

His current teacher, Pamela Hagen, said Nathan sets a good example for others for dreaming big and accomplishing his goal, no matter what the challenges are.

As for the book that took 2.5 years to complete, Nathan says it's all worth it.

"Even if it takes awhile, don't give up on that."

• Santa and his Super Hero is available at bit.ly/SantasSuperHero with net proceeds to the BC Professional Fire Fighters’ Burn Fund. You can also donate directly to the burn fund on the website.