Coquitlam theatre company takes a dive with a Disney musical 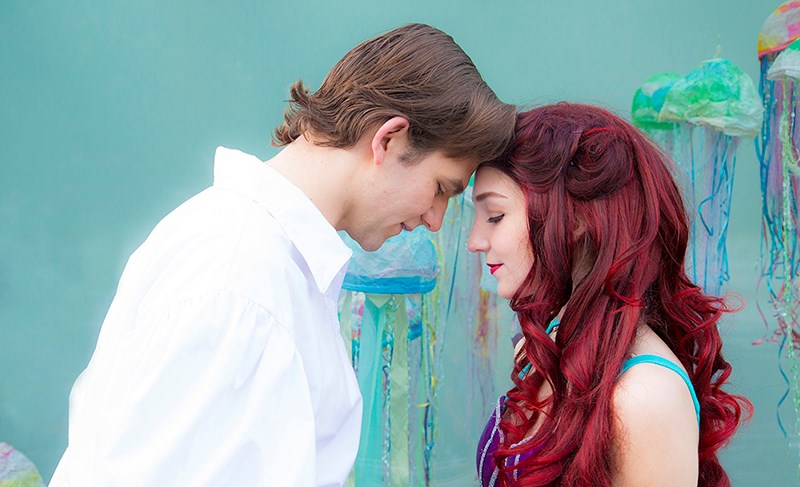 The relationship between a father and his child is of particular interest to Damon Calderwood right now.

The veteran stage actor from Port Coquitlam is pondering the delicate dynamic these days as he readies to play King Triton in Align Entertainment’s The Little Mermaid and as he and his wife prepare to welcome another baby this summer.

King Triton is very protective of his teenage girl, Ariel, “but at what point does a dad let up and let her make her own life decisions?” Calderwood asks. “The LIttle Mermaid is very much a coming-of-age story but it’s also about a dad-daughter love.”

The Coquitlam-based company is showcasing the Disney musical next month at the Michael J. Fox Theatre in Burnaby under the direction of PoCo resident Chad Matchette, the artistic director of the Lindbjerg Academy of the Performing Arts in Coquitlam.

While it’ll be Calderwood’s debut with Align, Erin Matchette — Chad’s wife — is taking on her fourth role with the group. She plays the sea witch Ursula, who tricks the mermaid Ariel into trading her voice for human legs to walk on land and win Prince Eric’s heart.

It’s not the first time Matchette has taken on an antagonist for Align. Last year, she was Potiphar’s wife in Joseph and the Amazing Technicolor Dreamcoat — which is up for multiple Ovation! awards later this month (see below) — and portrayed the child catcher in Chitty Chitty Bang Bang.

Having the rights to show the Tony-award nominated production for the first time in B.C. “is a nice feather in the cap for Align and Chad,” said Calderwood, a regular with Theatre Under the Stars.

And as it has been 28 years since Disney released the movie version the musical will bring out a generation of people in their 30s, Calderwood predicted. “It’s has such a wide appeal: grandparents, parents and kids just love it because it has a strong narrative and such clever writing.”

Other Tri-City residents in the crew include Patti Volk (producer), Melissa Turpin (choreographer) and Brent Hughes (musical director and conductor).

• The Little Mermaid, starring Elyse Maloway as Ariel and Colton Fyfe as Prince Eric, runs Feb. 3 to 18 at the Michael J. Fox Theatre. Visit vtixonline.com or alignentertainment.ca for tickets.

The annual Ovation! awards will be handed out on Jan. 29 for best musical productions in the Lower Mainland last year and Coquitlam’s Align Entertainment is nominated for a slew of accolades for its two shows: