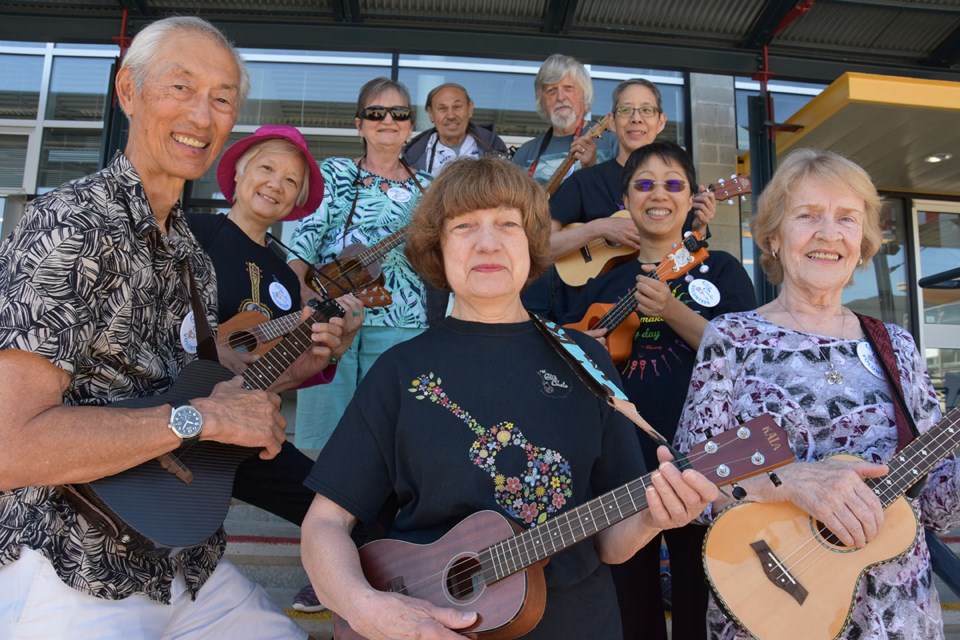 The members of the Coquitlam Ukulele Tiny Instrument Enthusiasts circle will host their first ukulele festival next month at the Evergreen Cultural Centre — an event that’s expected to sell-out as soon as registration opens. But before its sign up is launched later this month, the group wants to ensure the admission fee is zero.

“We have a lot of seniors in our group on fixed incomes,” CUTIE spokesperson Jen Chang said today (Friday). “They can’t afford to be here if there’s a cost and especially if they have to travel. It’s too much.”

And Chang said the group would be most grateful to its patrons and sponsors, given the amount of community outreach it does throughout the year and the number of people CUTIE has served since it started five years ago.

Currently, CUTIE has 320 people on its mailing list, with participants ranging in age from 5 to 90 playing at monthly jams, helping to teach beginners at free workshops and entertaining at the Port Moody Station Museum Easter party and at Canada Day in Coquitlam.

Anne Scott joined CUTIE three years ago and attends most jams. Previously, she had never picked up a musical instrument. “It’s social and a lot of fun,” she said.

“It changed my life,” added Wendy Cormack. “It’s a happy instrument and you can make a lot of new friends.”

The CUTIEs hope to keep the interest rolling with their inaugural festival, which will see four ukulele educators deliver master classes.

Manitoba Hal will present a blues workshop while Jim D’Ville will be up from New Mexico to talk about emotional connnections to music; Mexican native Eduardo Garcia, a Burnaby resident, will discuss chord shapes and Guido Heistek will give a lecture about chord melodies.

The presenters will end the day-long festival with a concert, at around 4:30 p.m.