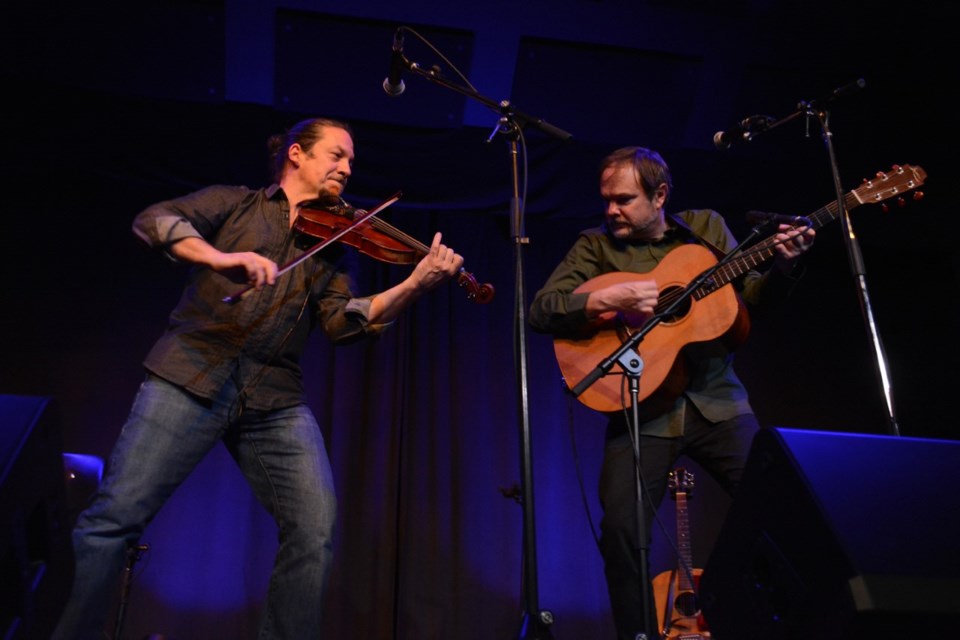 Pierre Schryer and Andy Hillhouse (on guitar) make their debut as a duo at Coquitlam's Festival du Bois.photo submitted

When Andy Hillhouse played at Coquitlam’s Evergreen Cultural Centre this month for his taped Festival du Bois concert, he was taking notes.

Hillhouse, who performs a show with fiddler Pierre Schryer for the virtual fest, is also the artistic director of the Harrison Festival of the Arts, an annual party that — pre-pandemic — ran live in July, at Harrison Hot Springs.

While this year’s schedule for the Harrison festival has yet to be announced, it may also have to pivot to online entertainment as Festival du Bois has.

“We could emulate it, if we had to,” Hillhouse said, “but we’re trying to do something in-person, perhaps local and scaled back. We just have to wait to see how things go and what the social restrictions are for gatherings this summer.”

Hillhouse said he was “very impressed” to see how much care Festival du Bois’ organizers put into the taped shows at the Evergreen two weeks ago: Acts came into the Coquitlam venue one at a time, musicians were placed apart on the stage, and everyone was masked. As well, a COVID compliance officer was onsite to adhere to the health protocols, he said.

For Hillhouse and Schryer’s concert, which can be viewed at festivaldubois.ca/grand-chapiteau, they offer traditional music touching on tunes and melodies from Quebec, Ireland and North Africa.

A guitarist, Hillhouse was the founder and manager of Mad Pudding, a 1990s Celtic funk band that hired Schryer for his award-winning fiddling skills (he won the North American Irish Fiddle championship title and was named the winner of the Canadian Open Fiddle, Grand Masters and Violoneux Championnat competitions).

It’s the first time the duo has appeared at Festival du Bois together.

The virtual Festival du Bois is “the best we can do at this point in time,” Hillhouse said, “but there is an intimacy with online performances because you can see it from your home. For now, we do appreciate the opportunity to perform.”