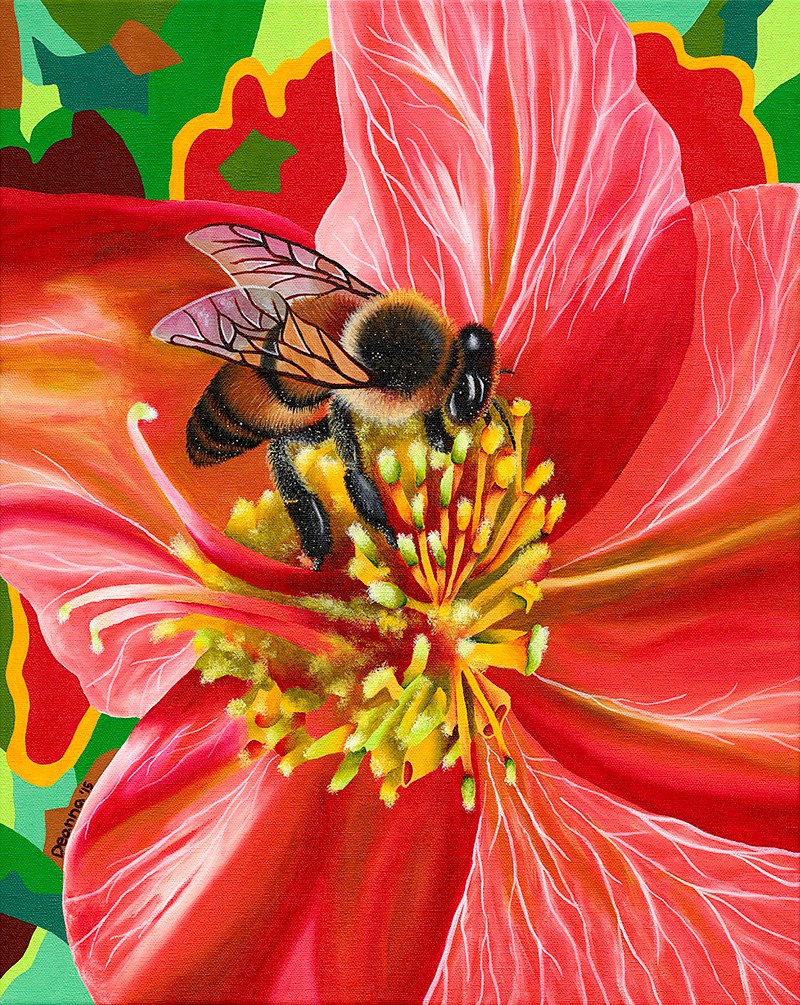 Coquitlam’s Deanna Fligg has several titles to her name: Artist, thanks to her studies at Kwantlen Polytechnic University; interior design manager, courtesy of BCIT; and floral designer, a certificate program she took with Maureen Sullivan, to name a few.

On Wednesday night (March 28), Fligg will officially be able to add “Canadian solo gallery exhibitor” to her resume when she opens Nectar at the Port Moody Arts Centre.

Her solo Canadian show is a debut for the Gleneagle secondary graduate, having previously exhibited her bright and colourful bee-themed works in a group display at the Agora Gallery in New York City, in 2016; it the first time she had ever placed her acrylic paintings on a gallery wall for public viewing.

In Nectar, Fligg has a couple pieces from her Big Apple exhibit plus another 18 she produced this year, ranging in size from 6x6 inches to 30x30 inches, in the Suncor Gallery. “I’m sticking with my love for pollinators and honey and bumble bees,” she told The Tri-City News last Friday. “It’s the style I’m most familiar with and like.”

Fligg was inspired for her latest series from photos she snapped while touring local gardens. Her fascination with the insects came after she watched a 2009 documentary titled Vanishing of the Bees, which blames their loss on a disorder called colony collapse.

“I kind of feel like they’re my friends and I want to raise awareness about them,” she said, adding, “I feel like they’re often misunderstood: They can hurt you but only when provoked. They’re really wonderful creatures.”

Fligg hopes to stay close to home with her art, exhibiting every two years. And this summer, she’ll be at Place des Arts to teach camp students about another talent of hers: jewellery making.