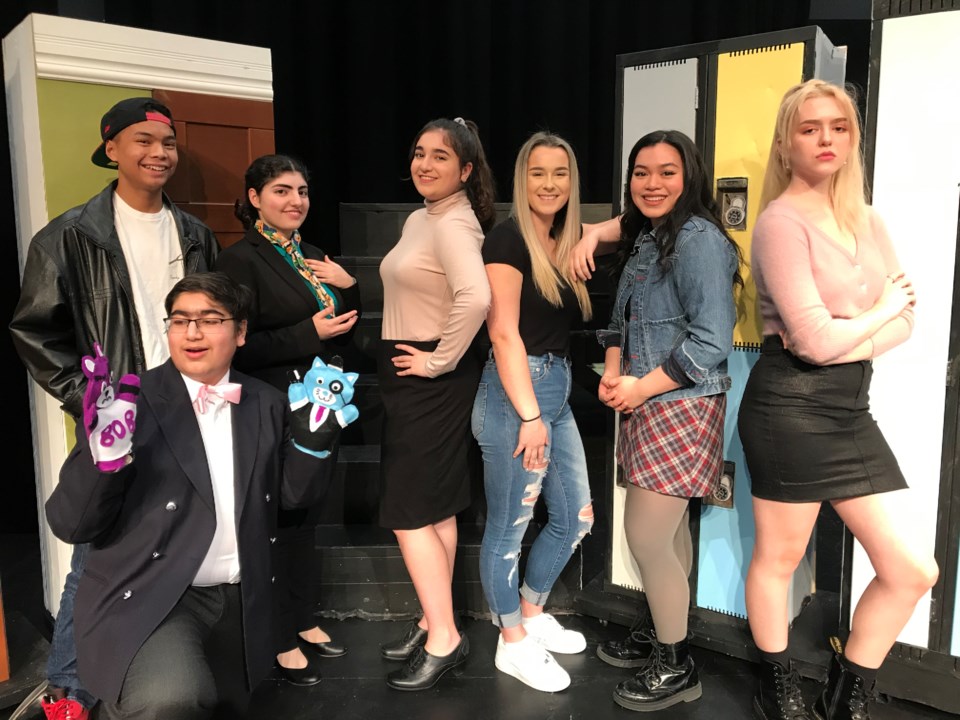 If there’s a happy takeaway for the two leads in Freaky Friday — the Disney musical that will be performed this month and next at Pinetree secondary school — it’s that they appreciate their mothers more.

Grade 12 students Kailyn Stratton and Colleen Bayati portray the daughter and mom in the show that sees their characters, Ellie and Katherine, magically switch bodies for a short time.

And the theatrical experience has given them a better sense of how much their single mothers juggle their personal and professional lives while trying to keep their families on track.

“It’s really opened up my eyes,” Stratton said before last Thursday’s rehearsal at the Coquitlam school. “I am grateful for how much she does for us every day. It’s really a lot of work.”

Drama teacher Zelda Coertze — filling in for Natalee Fera, who's on her maternity leave — picked the musical last year, knowing in advance the Musical Theatre 11/12 class she would be working with.

Stratton and Bayati, in particular, were singled out for their triple-threat talents and positive attitudes, said Coertze, who is the show director, producer, choreographer and set organizer.

“I was drawn to the themes of family and how to live a full life by walking in somebody else’s shoes,” she said.

But Freaky Friday was also the opposite of last year’s production, Spamalot, a Tony award-winning musical comedy adapted from the 1975 movie Monty Python and the Holy Grail.

While Spamalot is set in the Middle Ages and has strong male roles, Freaky Friday is modern and has a female take with “music that’s current for musical theatre on Broadway,” Coertze said.

As in past years, Pinetree’s music teacher, Marcia Carmichael, will lead a band of 20 musicians during the five public showings: Jan. 30 and 31 and Feb. 5, 6 and 7.

• Tickets to Freaky Friday at Pinetree secondary (3000 Pinewood Ave., Coquitlam) are $15 at the school or at the door on show nights. The curtain rises at 7:30 p.m. Call 604-464-2513. Want a chance to win a couple of tickets? Go to The Tri-City News' Facebook page by Jan. 24 to enter: https://www.facebook.com/tricitynewsBC/?ref=settings