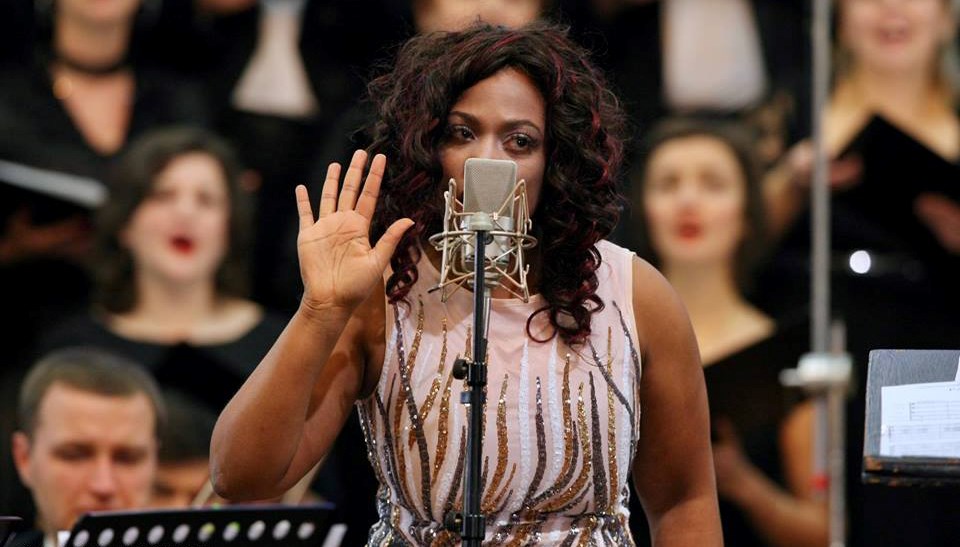 Gina Williams has many natural talents.

The Coquitlam resident writes songs, performs around the world in multiple languages and acts on television series — most recently, Riverdale, Rogue and Haters Back Off!

And next month, Williams starts a North American tour to promote her latest album that contains eight tracks she said were gifts from God.

Olympiad, she said, is the result of “The Big Guy” telling her to publish a classically inspired CD.

“I heard Him say, ‘Do an orchestral album,’” the self-described “Jesus Freak” said as she easily switched between a pop standard and opera, from an Yamaha upright piano in her Blue Mountain Park apartment. “So I did.”

Luckily, she had a few original compositions up her sleeve when the order came down.

The daughter of a math and physics teacher, the former child prodigy said she conceived Olympiad at 15 after receiving complete orchestral scores from God.

But, at the time, she didn’t write them down.

Later, at the University of Alberta, where she earned her master’s degree in piano performance in 2000, the concert pianist would tuck away to scribble the notes she heard from up above.

Fellow students and professors would see her madly composing in the hallways — or on the bus, en route to school — but they didn’t reach out to encourage her, she said.

“I would write down all this music from God then just throw it into the drawer,” she said. “I didn’t know what to do with it.”

Soon, she started to realize her songwriting talent and others did, too.

In 1999, she received a commission to pen the anthem for Grenada’s 25th anniversary of independence. And, over the next few years, she self-published three albums — in three different genres — as well as digital copies of her sheet music.

Her performance chops — on stage and screen — and repertoire range continued to gain attention.

In 2012, as a student of the Vancouver Film School, she made her musical début in B.C. with a concert titled The Dare (with Sam Ryan and The Vancouver Orchestra Club) at the Bell Centre of Performing Arts in Surrey; it featured songs from hip hop to classic rock to EDM.

That show proved to be a launch pad for her music career and it built her confidence, she said.

Last fall, with her eight classical music tracks in hand, Williams flew to the Ukraine to record Olympiad with the Academic Choir of the National Radio of Ukraine, under conductor Yulia Tkach.

Its release was followed with a recital at a concert hall in Kiev, which got her a television news spot.

For now, though, her mind is set on the Summer Classics tour. Her first gig is June 10 in Seattle and continues in Surrey on June 24 (Northwood United Church); Oshawa on July 15; Mountain View, Calif., on Aug. 26; and ends in Edmonton on Sept. 9.

Williams has also got another album in the works — at the opposite end of the classical music spectrum. “I’m going to rock out,” she said with a laugh. “It’s something that’s calling me. Maybe it’s divine intervention again.”

• To order a copy of Olympiad, visit ginawilliams.com.