Half a century for Port Moody Art Association 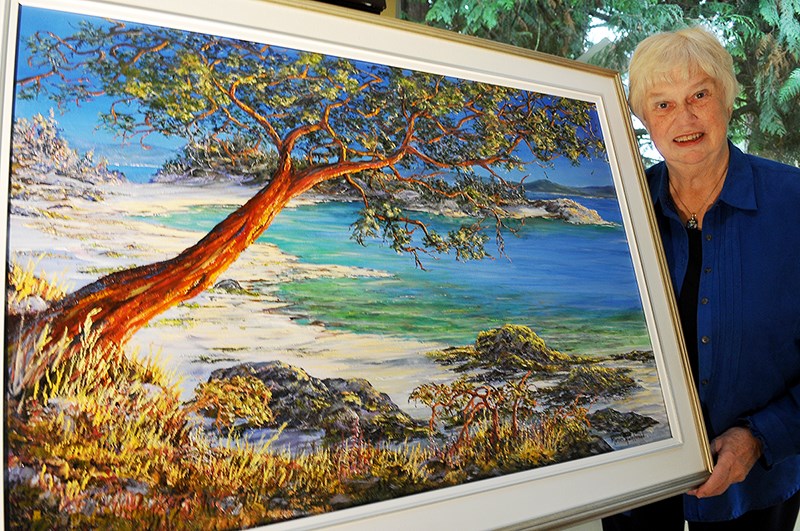 Marian Hazelwood of Coquitlam with one of the three oil paintings she will sell this weekend at the Port Moody Art Association exhibit, in the recreation complex.janis cleugh

In Vancouver’s Expo year of 1986 — and after she saw her youngest son enter kindergarten — Coquitlam painter Marian Hazelwood got an invite to an art show at Dogwood Pavilion.

Hazelwood had studied visual arts at her Vancouver high school and had picked up a few classes on the side but, for the most part, the mother of five had put her hobby on hold to raise her family. “I figured oils and kids don’t mix.”

Then, Laurie Thompson and Hazel Graveness reached out to re-spark her passion.

Hazelwood remembers that Dogwood display well. “I was just about in tears. It was so wonderful,” she said, “because I had finally found an outlet where I was supported.”

A project facilities manager by trade, Hazelwood soon signed on to become a member of the Port Moody Art Association (PMAA), a group Thompson and Graveness had belonged to for at least a decade each.

Hazelwood quickly gained a name for herself with her powerful oil landscapes. An avid hiker and camper, Hazelwood took her cue from nature, snapping photos of B.C.’s land, water and trees and translating them onto a canvas.

And this weekend, for PMAA’s 50th anniversary show and sale, Hazelwood will have three of her original compositions up for grabs: A striking image of an arbutus tree from a fishing trip she took with her husband and a son near Sooke, on Vancouver Island; a piece titled “Timeless” of a cedar tree in the forest; and “Whispers” of a west coast beach.

But the paintings — and the dozens of others exhibited by PMAA members — aren’t the only reason Hazelwood is excited about this weekend.

Hazelwood is anxious to reveal PMAA’s anniversary mural, a two-year project to mark five decades of the arts organization she joined 31 years ago.

In total, 35 PMAA members were picked to paint a 10” by 10” square for the legacy mosaic, which after this weekend’s show will be donated to Eagle Ridge Hospital.

A photo of a blue heron, snapped by PMAA member Christine Yurchuk, was enlarged then divided into a grid with 35 squares for the artists to paint — using their own styles — then to blend in as a group (Hazelwood’s square is #34, titled North Shore of the Inlet, located at the bottom, second from right).

The artists’ additions to the Yurchuk photo include well-known landmarks in PoMo (city hall, Burrard Generating Station, etc.) as well as common wildlife and First Nations historical references. “It really came together well,” Hazelwood said proudly while studying each panel. “There’s so much to look at.”

Guests to the 50th anniversary show and sale will be able to see the finished mosaic — framed by PMAA member Randy Green — in the main entrance, in the wellness room at the Port Moody recreation complex; however, for those unable to attend the show, it can also be seen on the PMAA website, thanks to Green’s technical talents, at: portmoodyartassociation.com.

• Doors open Friday at 7:30 p.m. for the Port Moody Art Association’s 50th anniversary art show and sale. It continues Saturday and Sunday from 10 a.m. to 5 p.m. at the PoMo rec complex (300 Ioco Rd.). Admission and parking are free.