School District 43 theatre instructors talk about how much it costs to put on a production.
Janis Warren Feb 24, 2016 12:12 AM

If you look at musical theatre like you do sports, it has the biggest team in the high school with the longest season.

But, unlike athletics, it operates on next to nothing.

That’s how Nicole Roberge sums up her drama group at Riverside secondary in Port Coquitlam.

And other theatre instructors in School District 43 can be heard voicing the same woes as they seek to put on big annual shows based on ticket, concession and raffle sales from the year before.

It’s not easy task and, all too often, the departments are stretched so thin the teachers wonder how they’d cope without the generous in-kind donations and volunteer services from students, staff, parents and alumni.

Yet, somehow when the curtains rise and the magic appears, the months of blood, sweat and tears are forgotten — at least on opening night.

“I can never believe how we manage to pull it off every year but we do,” said Roberge who tomorrow night (Thursday) opens the 1934 Cole Porter hit musical Anything Goes.

This year, Roberge has so many Musical Theatre 11/12 students in her cast she’s had to double the lead roles for the six performances.

Roberge was strict with her budget because she spent $8,000 to take students to New York City last spring on a Broadway tour. As well, this spring, Riverside secondary will represent SD43 at the Sears BC Drama Festival and, although the event is in New Westminster, the school is required to be a “full participant,” meaning three nights of hotel rooms at $325 per student for 40 teens.

Roberge’s number crunch this year meant she also had to scale back on the annual show. The licensing rights for Anything Goes came in at $1,500 US because of its age and “dated material” (of which Roberge updated for modern audiences).

Still, that licensing fee is a bargain compared with other Tri-City high school productions happening this year.

Port Coquitlam’s Archbishop Carney regional secondary, a private Catholic school for grades 8 to 12, coughed up $5,000 US to purchase the licensing rights to Disney’s Beauty and the Beast, from Musical Theatre International (MTI).

It’s the most expensive show in Carney’s history with a $20,000 purse — half of which is going toward the rental of Terry Fox Theatre, said drama teacher Charles Harris.

As Harris can’t fall into deficit, he has managed to secure funding from three sponsors: Bisceglia & Co law firm, CSA Building Sciences Western Ltd. and Corner Sports. He is also relying on last year’s ticket sales for In-Laws, Outlaws and Other People (Who Should be Shot) and the one-act play fundraiser.

Volunteers are his lifeline.

“At last count, I had 32 adults volunteering to work directly with the students,” Harris said. “That does not include the parents that will help with transporting all our sets, props and instruments to the theatre and back after closing night. There are a lot of people volunteering to make the show successful.”

Harris, who has already sold out his Friday night show that features 45 students in the extracurricular, said he evens out the big productions with stage plays the following year.

Gleneagle secondary, which is also hosting Beauty and the Beast in May, spent $3,000 US on licensing rights but, unlike Carney, has no corporate sponsors.

“I write letters to local businesses asking for money and it doesn’t always come because there’s no return in it for them,” said Pinetree secondary drama teacher Natalee Fera, whose production of Disney’s High School Musical this month set the school back between $12,000 and $15,000.

At Centennial secondary, which concluded its run of Shrek: The Musical earlier this month, drama teacher Lisa Boddez said the rising US dollar will have an impact next year for high schools.

The proceeds go toward the licence, costumes, props, building materials, paint, instrument and sound rentals, programs, posters, photos and lights. “Even the cost of a substitute teacher to cover my classes for the three days we have a school matinee all come out of ticket sales,” she said.

And although the team made a $2,000 surplus, it still has to shell out $1,400 to the music department for the purchase of two new speakers for the theatre this year. “All in all, we will have roughly $600 left over from this year,” Boddez said.

But at least it met its goal to break even, she said.

As for next year, when Centennial moves into its new digs behind the current school on Poirier Street, Boddez said a fundraising challenge is underway: The community is being asked to buy a $200 seat in the new theatre. In return, donors will receive a plaque with their name on it, she said. 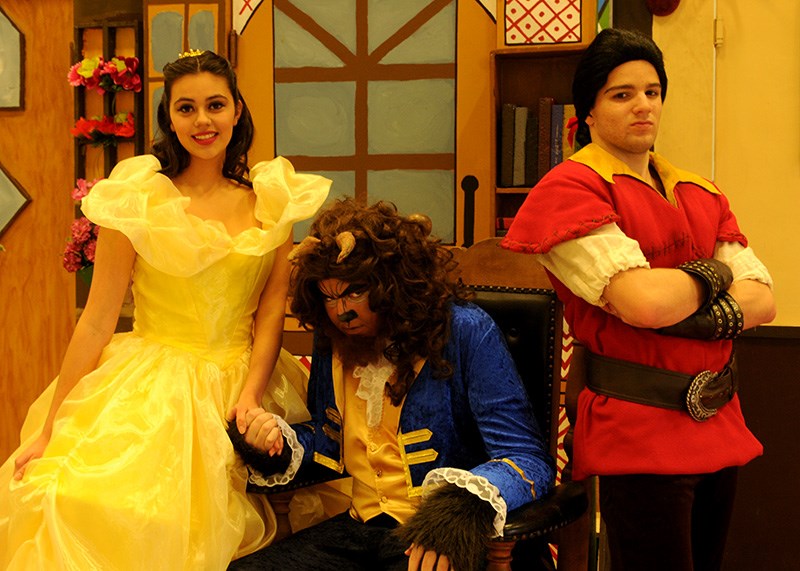