This weekend’s Supernatural Stones show is hosted by the Port Moody Rock and Gem Club at the Kyle Centre.
Oct 20, 2015 10:09 AM By: Janis Warren 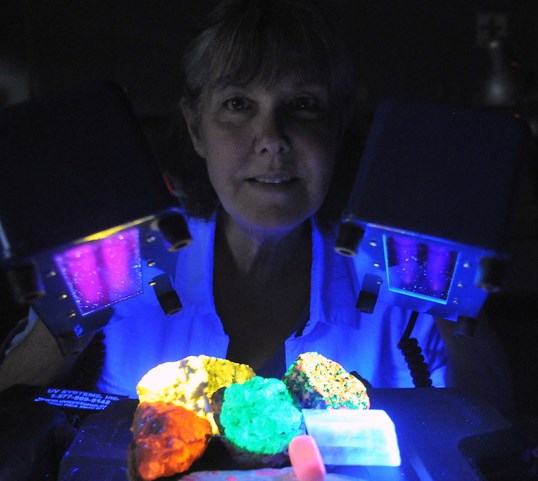 Jennifer Moore has just returned from Washington State with an international prize.

The gemologist clinched first place for her display case at the Pacific Northwest Friends of Mineralogy conference.

Her fluorescent minerals and train exhibit were a hit with the judges and crowd in Kelso, WA.

Now, she hopes to recreate them for this weekend’s Supernatural Stones show, hosted by the Port Moody Rock and Gem Club at the Kyle Centre.

It’s a popular annual event, one that draws more than 1,000 visitors and rock hounds, like herself, from around the region.

And, given the space the club has devoted to her collection, it’s likely Moore’s rocks will be the shining attraction.

She has both long- and short-wave lights as well as less powerful pen lights she purchased for a tidy sum from U.S. dealers.

The shortwave light has the strongest UV and, thus, when raised over a rock with active elements, it can make the minerals give out an intense colour.

For example, an Iceland spar — a rock used by the Vikings for navigational purposes — is a transparent form of calcite that has double refractive qualities.

But when put under a UV light, it glows red or pink.

Moore hands over a pink-, white- and black-dotted rock that looks like an average chunk of granite.

“What do you think that is?”

She flips on the short-wave light box and up pops a wild blend of red and green points, activated by calcite and willemite.

This particular rock is from Franklin, New Jersey — home to a decommissioned zinc mine. In 1968, the state declared the Franklin borough the Fluorescent Mineral Capital of the World because its zinc deposits had produced 361 types of mineral species.

Moore also is eager to show her hyalite opal rocks from HiHium Lake, in northern B.C., where she once had a claim. Under regular light it looks like clear glue swirled onto a rock; however, under a UV light, it goes bright green because of the uranium content.

Moore loves the reaction when she turns on her high-powered lights (she also gives demonstrations of what the new pages of the Canadian passport look like when fluoresced).

Moore, who studied gemmology at BCIT, said she got interested in fluorescent rocks while writing her thesis.

Now, a member of the Fluorescent Mineral Society, she shows and sells some her acquisitions including at the BC Gem Show, which was held this past spring in her hometown of Abbotsford.

Andrew Danneffel, spokesperson for the 60-member Port Moody Rock and Gem Club, said he believes Moore’s display will bring more people out to the annual show.

• The Rock and Gem Club show, Supernatural Stones, runs Oct. 24 and 25 at the Kyle Centre (125 Kyle St.) from 10 a.m. to 5 p.m. Admission is by donation. Visit portmoodyrockclub.com.
jwarren@tricitynews.com
twitter@jwarrenTC