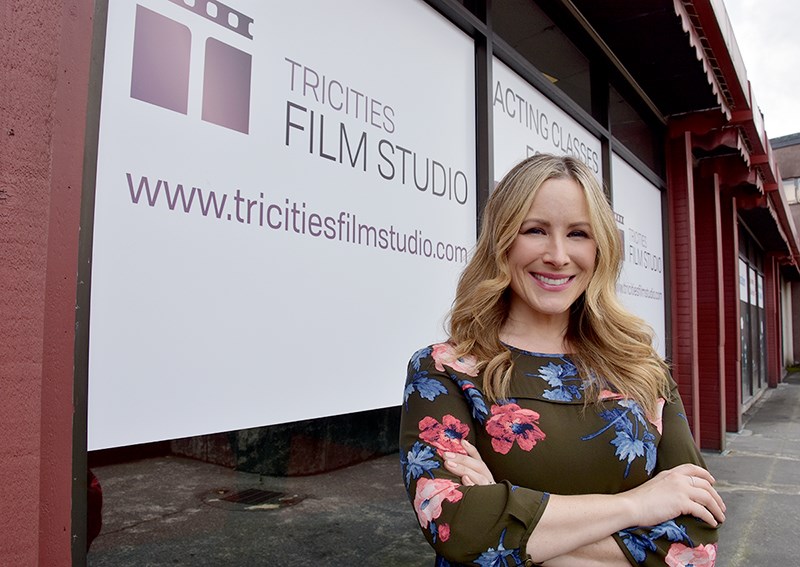 When husband-and-wife team Mike Lyons and Lisa Durupt moved to Coquitlam eight years ago, they wondered why the Tri-Cities was so void of taping and training studios given the film boom in Metro Vancouver.

The couple had friends locally who were in the film and television industry, too, and needed a quiet, professional space to tape their auditions to send to casting agents. “We just told them to come over to our home because there was nothing set up around here to do that,” Durupt shrugged.

Durupt, who’s currently guest starring in the 12th season of CBC’s Heartland and is cast in Hallmark’s Murder Mystery series, The Chronicle Mysteries, also scratched her head over young actors and their families, who she saw would hurry out from Metro suburbs to get to Vancouver call-outs and classes.

To fill the gap and make it easier for actors, Lyons and Durupt looked around the Tri-Cities for a commercial spot to lease to begin a business.

Saturday, they’ll launch the Tri-Cities Film Studio, offering semester-long acting lessons to emerging and professional actors of all ages and levels — plus a taping studio.

Durupt plans to lead most of the sessions while Lyons will be behind the camera and edit the videos to fire off to casting agents around the region.

The couple has no doubt their enterprise will be successful. “It’s such a booming industry,” Lyons said. “There’s a lot of talent here in the Tri-Cities and we want to make sure they’re just as part of the scene as everyone else.”

Vancouver is the fourth biggest filming city in the world after Los Angeles, New York and Atlanta, they said, and Vancouver’s nine casting agents are always on the hunt for fresh faces for the networks, especially young ones.

Vancouver is very attractive for Hollywood as it’s a direct flight from LAX, less than 2.5 hours away, and the province provides tax incentives to producers, Lyons said. As well, there’s already a solid foundation for filming infrastructure.

Durupt and Lyons, who both have bachelor of arts degrees in theatre and drama from the University of Winnipeg and trained at the Canadian College of Performing Arts in Victoria, said they’ll use their past experience and best practices in their coaching techniques like audition and film set etiquette.

They’ve divided their lessons into age groups: novices (ages seven to nine), who want to learn the basics of screen acting like on-camera improvisation, storytelling and working with scene partners; juniors (ages 10 to 13), with students building on the fundamentals and studying scene and script breakdown; seniors (ages 14 to 17), who will prepare memorized scenes and on-camera auditions as well as learn about cold reading, branding and representation; and adults, who want to build confidence through acting.

Durupt said she wants her students to think like athletes.

“The business is very sports-minded: sometimes you have good days; other times, not. You have to prepare yourself for the next round and learn from your mistakes.”