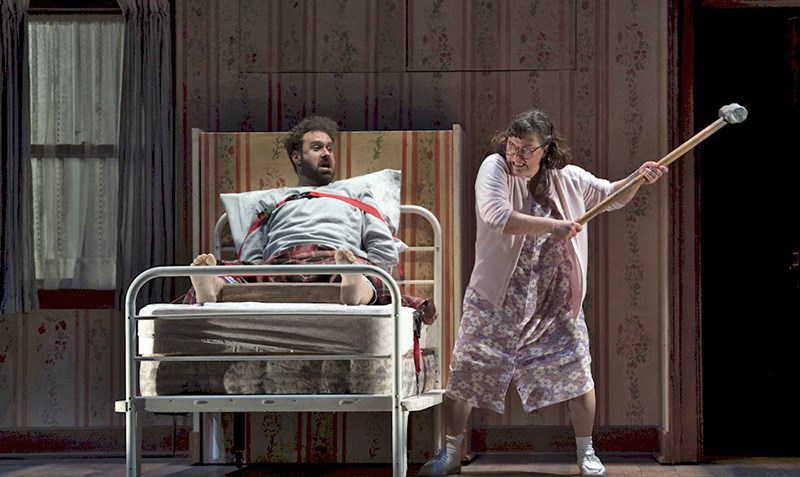 Annie Wilkes (Lucia Frangione) is the “number one fan” of author Paul Sheldon (Andrew McNee) in the play Misery.DAVID COOPER

Lucia Frangione made sure she didn’t see the movie.

Stephen King’s chilling novel, Misery, was scary enough for Frangione not to get worked up about the flick the followed three years later — the one in which Kathy Bates won the 1990 Academy Award for Best Actress in her role as the psychopathic Annie Wilkes.

Rather, Frangione — in preparation of the Arts Club Theatre stage production, which opens Tuesday at Coquitlam’s Evergreen Cultural Centre — reached out to a psychologist friend to get an assessment of the script.

“I didn’t want to come off as just crazy,” Frangione said of her character. “I also wanted to be respectful to Annie because she’s mentally ill. She’s in pain. I wanted to know, What are the seeds of her terrible trauma?”

Frangione’s “gentle and quiet” performance of Annie has already won her many standing ovations as the company tours the show this and next month around the Lower Mainland — and in Vernon — before it opens for a six-week run at the Granville Island Stage in Vancouver, in April.

In the William Goldman stage adaption, Frangione plays opposite Andrew McNee, whose character Paul Sheldon, a successful romance writer, is rescued from a car crash near the home of his “number one fan,” Annie Wilkes, who holds him prisoner.

Munish Sharma portrays Buster, the sheriff, in which Annie plays a game as he seeks answers into the disappearance of Sheldon. He has an important role and their scenes are surprisingly tricky, Frangione said, as both are trying to glean information from each other without revealing too much.

Still, it’s Annie who takes control. “I love making the audience gasp,” she said. “I’ve never played anyone do that before. It’s so refreshing not to be the femme fatale who has her cleavage out. I’d much rather play somebody who is fierce and take power on stage.”

Frangione is no stranger to the Arts Club Theatre. As a playwright, the Alberta native was commissioned to pen Paradise Garden (2010), in which she played Leyla under the direction of Morris Ertman. She also wrote In a Blue Moon that Arts Club took on tour (with a stop in Coquitlam) in January 2016. As an actor, she was in its 2015 production of Farewell, My Lovely.

“I have loved my relationship with the Arts Club Theatre,” she said. “They have an arts and business savvy, and are keen to promote new Canadian plays. In the absence of a true regional theatre, they have stepped up.”

• Tickets for Misery at the Evergreen Cultural Centre (1205 Pinetree Way, Coquitlam) are via the box office at 604-927-6555 or online at evergreenculturalcentre.ca.