Oh, What a unique way to present a play 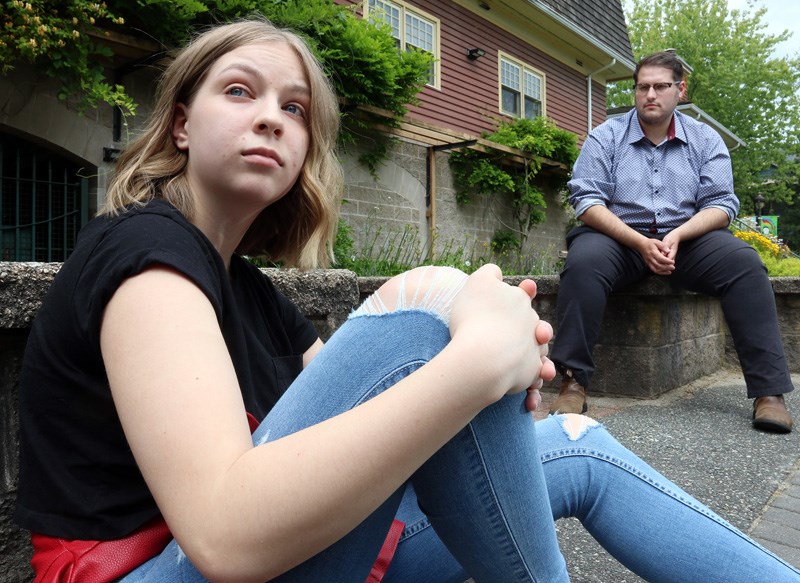 Lara Chamberlain plays Harry Arkwright, a WWI soldier pining for his family and the comforts of home during his first Christmas in the trenches in Oh What a Lovely War! 2.0, an online production that is being directed by Seamus Fera, right.MARIO BARTEL/THE TRI-CITY NEWS

Seamus Fera is confident the Coquitlam Youth Theatre production of Oh, What a Lovely War! he’s directing will be greater than the sum of its parts.

That’s because it’s all parts.

Fera and the 21 young thespians in his charge were already blocking scenes from the WWI comedy musical when the COVID-19 pandemic shut rehearsals down and put CYT’s year-end presentation at Port Moody’s Inlet Theatre in peril. But after three days of dreading the worst, the director and the 20 members of the troupe who elected to stick with it pivoted to tackle the challenge of presenting the play online.

At a sprawling two-and-a-half hours and with each cast member playing a multitude of characters, it was a big ask.

Monologues was the answer.

Fera, his production team, and the student-actors, who range in age from 10 to 17, whittled Joan Littlewood’s original story to 80 minutes, then pared it some more to come in at a more reasonable 50 minutes which was then divided into 20 five-minute increments. Each of those segments represented a monologue that would be adapted from a scene or several scenes in the play and then recorded by the actors in their homes to be edited together into the final presentation that premieres on YouTube on Friday.

Lara Chamberlain, 14, said she had some doubts at first. But as the young actors worked with Fera in virtual meetings and texted each other ideas, notes and messages, the creative process took on a life of its own.

“We had to kind of work together with each other, but separately,” Chamberlain said.

Fera said he had to trust his actors.

“I always have a very clear vision,” he said of his directing style. “I had to throw that out and focus on the process.”

As the production, now dubbed Oh, What a Lovely War! 2.0, progressed, that process started to look more like a film shoot than a theatrical play.

“It gave me an appreciation for the theatricality of film acting,” Fera said, adding other members of the team had to adjust their thinking from a stage presentation as well.

Costumes had to be designed using clothes and materials readily available at home, as did sets. And each actor was provided with paper to erect a simple green screen upon which a background could be digitally inserted in post-production.

Chamberlain said she had to learn where and how to position the cell phone she used to record her scene, scout a location in her home with an eye for setting up the green screen as well as have sufficient light available — she settled on a blank wall in her parents’ bedroom.

After perfecting their scenes in online rehearsals and small virtual workshops with Fera, the actors were given a week to record their five-minute monologue and submit it to a Dropbox folder for final editing.

Chamberlain, who plays a soldier pining for his family and better days amidst the mud and horror of a trench, said it took her two takes to nail her monologue, which was broken into three parts to allow for different camera angles.

Fera said the intimacy of each performance has allowed him to focus on the details of his actors’ craft, something he figures he’ll be able to carry forward to future theatrical endeavours.

“Sometimes we lose sight of the craft of acting when we’re trying to put on a big show,” he said.

Chamberlain said the individual feedback she received as she worked on her part will also serve her well.

“Ensemble acting is fun, but now that it’s all been stripped down, it was a really cool experience,” she said.

• Oh, What a Lovely War! 2.0 premieres at 6 p.m. on Place des Arts’ YouTube channel. Afterward, Fera will answer questions about the production on Facebook. The presentation is free, but donations to support Place des Arts’ youth programming are being accepted.