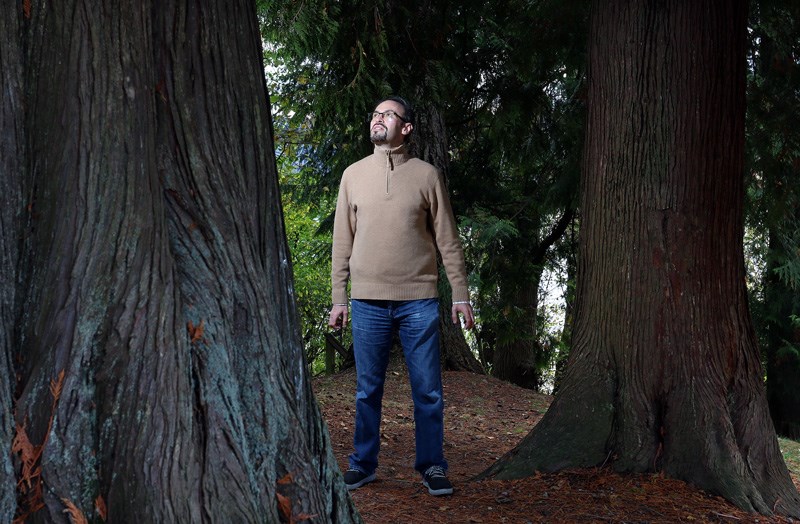 As a kid growing up in Mexico City, Carlos Lozano Gilabert loved trying to out-scare his friends while telling ghost stories.

Now 46-years-old and living in Port Moody, Lozano Gilabert is still doing it. He’s just published his first English-language collection of spooky short stories, just in time for Halloween. The 13 scary tales in Voices from the Dead (plus one bonus story) are also the first of an anthology of more than 50 stories that will be printed in a series of four books to be released in six-month increments by local publisher, Timbercrest Publishing.

Lozano Gilabert said his fondness for ghost stories was borne from a desire to escape the frightening realities of crowded, crime-ridden Mexico City where robberies and gruesome cartel killings were a daily occurrence and dominated nightly newscasts.

“They would do unthinkable things,” Lozano Gilabert said. “The stories kept that at bay.”

From swapping tales in the schoolyard or at an abandoned store nearby where Lozano Gilabert and his friends snuck off to during breaks, he started writing down his stories during university. Along the way, he figures he had two encounters of the his own with the paranormal.

The first — when Lozano Gilabert was in high school — was a vaporous apparition of a boy playing with a ball that appeared in a window as he and some friends were telling stories in a living room.

The second came as he was walking along some train tracks in Cambridge, England, and he and his girlfriend at the time thought they heard a train, stepped aside but instead were serenaded with a haunting aria from an opera.

“It was a really weird experience,” Lozano Gilabart said, adding ghosts don’t always have to be frightening.

In fact, he theorizes, they’re really a way for many people to come to terms with their own mortality. Believing they could continue to exist in some diaphanous dimension is easier than accepting death as an ultimate end.

Lozano Gilabert said the fear most people have of ghosts is based upon feelings of envy and guilt. They’re envious of those who’ve achieved an afterlife and they feel guilty that some people get there while others do not.

Lozano Gilabert said his inspiration can come from a photo, a phrase someone speaks, a passage in an article. From the questions such an encounter generates, he begins spinning a fantastical tale.

But, Lozano Gilabert said, he has to be careful to keep it relatable.

“If it’s a ghost of someone you don’t know, it’s not as frightening.”

Not that a spine-tingling scare is always the intent. Victorian ghost stories were often told at bedtime, to provide a pleasant transition to dreamland.

Charles Dickens wrote more than two dozen ghost stories, often tucking them into longer tales. He even joined the London Ghost Club, an organization that investigated paranormal encounters and even attended séances, although more to be able to debunk the phantoms they supposedly attracted.

Lozano Gilabert concedes he harbours no such literary ambitions. Writing down the stories he’s been conjuring since his youth is just a way to transport him to another reality. Whether it exists or not.

Voices from the Dead is available as an ebook at amazon.ca. Lozano Gilabert will give a live reading from his book on his Facebook page at 3 p.m. on Saturday.