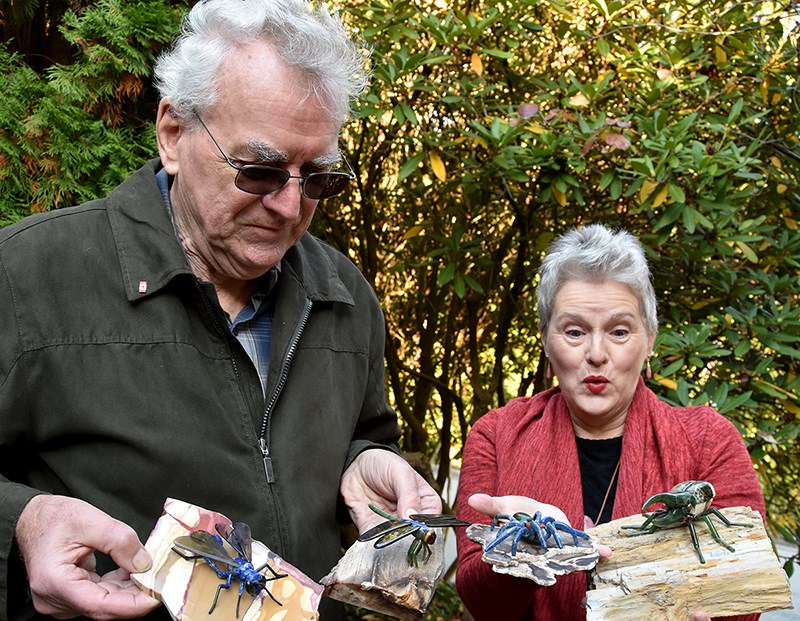 Alan Tracey and Rose Kapp, members of the Port Moody Rock and Gem Club, hold his 3D rock bugs that will be on show at this weekend at the Kyle Centre (125 Kyle St., Port Moody) for the group’s annual exhibit and sale, running 10 a.m. to 5 p.m. on Saturday and Sunday. This year’s event is called Fascination: Personal Stories Behind the Passion for Stone.JANIS CLEUGH/THE TRI-CITY NEWS

Rose Kapp can remember as a child hounding for rocks with her dad in Alberta.

There are stories from other Port Moody Rock and Gem Club members, too, about how they began, of which many will be shared this weekend at the group’s 40th annual show and sale.

Show committee member Rose Kapp, a Coquitlam resident, said the group wanted to highlight the reasons why their members got involved in rock hounding, cutting, grinding and polishing.

“Everyone’s got a story,” she said. “I think, for some people, it brings back a lot of memories.”

Tracey said he hears a lot of tales from passersby when he’s in the workshop at Dogwood Pavilion, a seniors’ facility in Coquitlam. People will pop into the shop and talk about their dad, who died 40 years ago, and his eye for colours and patterns. “It’s just amazing,” Tracey said.

And with so many new faces in the Port Moody Rock and Gem Club — many of them parents with their keen kids — Kapp said the organization also wanted to honour their roots with the craft.

Fascination: Personal Stories Behind the Passion for Stone follows last year’s nod to Canada 150, a show that recognized stones from across the country that attracted thousands of visitors.

Like last year, the club will offer sample boxes for sale — though not just containing Canadian rocks and minerals as for the sesquicentennial; it will be the last year the boxes will be available.

Dozens of vendors will also have their tables set up while educator (and 2014 honorary member) Erica Williams will be on hand to answer questions during the event. As well, the club will auction off a necklace with a faceted stone cut by the late Cecil Smith, the club’s shop supervisor.