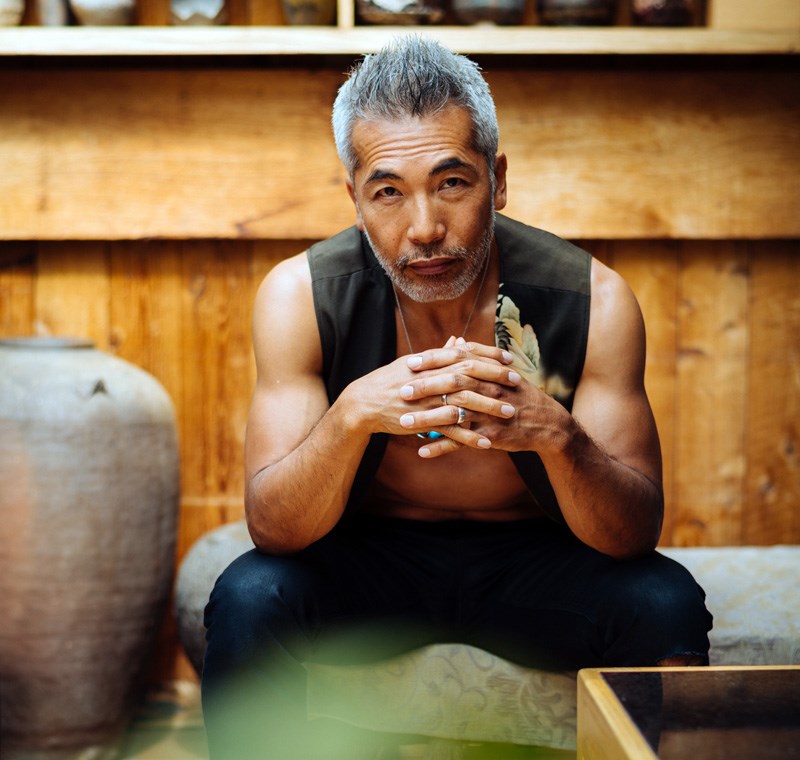 Port Moody playwright Hiro Kanagawa started his career as a sculptor. His latest play is part of a take-out box of scripts that can be performed at home.FARAH NOSH PHOTO

In these COVID times, you can eat take-out food, drink take-out beer, get pretty much any inanimate object known to man delivered in a box with a smile on it.

A play by Port Moody playwright and actor Hiro Kanagawa is one of four scripts that comprise Plays2Perform@Home, a box set of intimate productions commissioned by Vancouver theatre company Boca del Lupo.

The 10 to 20-minute plays are meant to be performed by the recipients, in their home, around the dinner table or even a campfire, their audience mostly each other or a few people already in their pandemic “bubble.”

Kanagawa, who lives in Eagle Point with his wife and two children, said his contribution, entitled Negotiations, is a piece of “meta theatre” that acknowledges it’s a script written by a playwright, and the characters recognize they are characters in a play speaking lines composed for them. He said it was an obvious creative choice to make as most of the people performing it will likely be amateurs.

“I think by acknowledging the artificiality of the situation, we can actually talk about what we’re missing when we don’t have live theatre,” Kanagawa told The Tri-City News.

Innovation is not unusual for the award-winning playwright, whose script Indian Arm — an adaptation of a Henrik Ibsen novel — was recognized with a Jessie Richardson theatre award in 2015 as well as a Governor General’s literary award for English-language drama two years later.

He’s also contributed to Boca del Lupo’s production of Red Phone, that takes place in two fully-enclosed phone booths where audience members participate in a five-minute scripted conversation. It’s a socially-distanced way of performing a play with a live audience and it’s being presented on Granville Island July 1 to Aug. 22. For tickets, go to Eventbrite.

Kanagawa said his ability to think beyond the parameters of a traditional stage comes from his varied career that started as a sculptor and stretched to acting roles in film, television, animation and even a video game.

“I’ve had my finger in a lot of different pies,” he said. “If I have an idea, I can decide that may not be a play, it could be a short story, or an essay or a haiku.”

Kanagawa said it took him about two weeks to write Negotiations. And while the play isn’t about the current public health crisis, it was certainly an influence as it addresses the sense of existential limbo many people are feeling as we wait for the pandemic to subside and a form of normalcy to resume. He said it’s not unlike the uncertainty of losing electricity to your home or your internet connection.

Kanagawa said the excitement of pushing the boundaries of traditional theatre is heightened by the mystery and uniqueness of each performance, none of which he’ll likely see unless someone decides to present it over the Zoom virtual meeting platform and invites him in.

“You don’t really know how it’s going to turn out,” he said.

• To learn more about how to obtain the Plays2Perform@Home box set of scripts, or how to participate in Red Phone, go to bocadellupo.com.