Doctor Who, Star Wars replicas are popular with this Coquitlam family.
Jun 11, 2019 5:37 PM By: Janis Cleugh 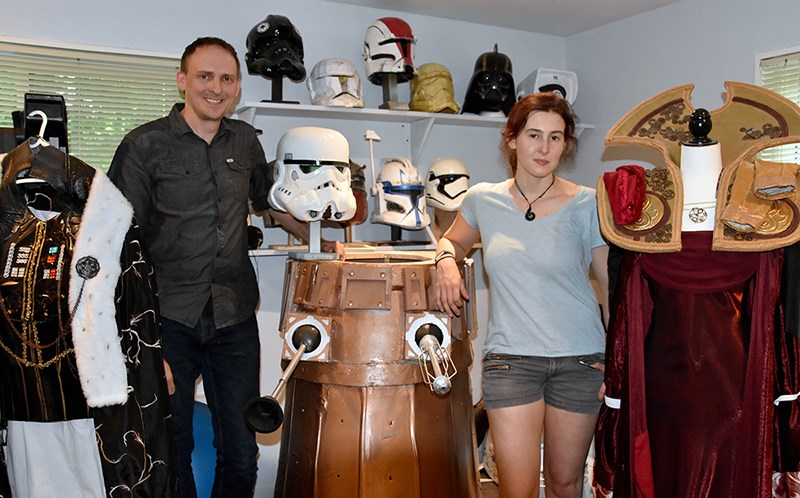 Damian Trasler and his daughter, Laurel, in their basement with the costume props they've built.JANIS CLEUGH/THE TRI-CITY NEWS

About a decade ago, just after Damian Trasler and his family moved to Coquitlam, the U.K. native was searching to find a replica Star Wars helmet.

A fan of the movie series “forever,” he said, Trasler was dismayed to learn the professionally built helmets were priced at around $300 apiece.

But soon he found an online posting from someone who had created the version he wanted.

He also printed out paper designs for a few of his 3D models.

“It’s all very slapdash because it’s done within a budget,” he said, noting the cost is around $30 and each takes about three months to create.

His dress costumes from characters in Doctor Who — the British science-fiction TV show that depicts the travels of a Time Lord called The Doctor — and from the Ian Doescher’s book William Shakespeare’s Star Wars have appeared at the Vancouver Fan Expo, an annual three-day pop culture gathering.

Last October, Trasler and his eldest daughter, Laurel, also whipped together a Dalek from the Doctor Who series for the convention.

The replica of the fictional extraterrestrial — complete with bells and whistles — didn’t go quite as planned, though. “I cheaped out on the wheels and it broke down,” he recalled, “so we carried him into the place and he sat still. Everybody was pleased to see him.”

Trasler promises an updated Dalek will return to the fan expo in 2020. He’s also considering debuting a speeder bike, based on the Lego-fied Return of the Jedi (1983), and helmet from Solo: A Star Wars Story (2018).

Trasler admits costume prop building isn’t the most relaxing hobby but his passion for science-fiction stories is something he’s enjoying with his three children.

Last year, his kids flew to the fan expo in Edmonton to meet their favourite Doctor Who actors — David Tennant and Matt Smith — and each dressed up in a different incarnation of The Doctor. Now, their images with Tennant and Smith hang in the living room.

This fall, the family is planning its next sci-fi adventure: A visit to the new Star Wars: Galaxy’s Edge theme park at Disneyland in California.